India’s Wrestling hero, Sushil Kumar is being charged in murder case of junior champion Sagar Dhankhad within Chhatrasal Stadium. Though Kumar had denied involvement in the case, Delhi Police issued a non-bailable warrant against the wrestler.

The only Indian in ‘Independent India’ to win two of the coveted Olympic medals (Bronze-2008, Silver-2012) in individual events; the most decorated wrestler India has ever produced: India’s only world champion in wrestling (2010) – these are just a few of the numerous accolades that can be chalked up to the incredible Sushil Kumar. He has been a shining light for Sports in India, especially at the Olympic Games, where the country has tasted limited success. Therefore it came as a massive shock to the people of the entire country when this reserved and diminutive grappler, was named as the prime suspect in the murder of 23-year old, former junior national Wrestling champion Sagar Dhankhad, within the parking lot of the Chhatrasal Stadium in Delhi.

On May 4, 2021, a violent altercation between two Wrestling groups at the Chhatrasal Stadium, ended in a shootout. Several of the people involved, needing to be rushed to the hospital. Unfortunately, Dhankad succumbed to his injuries at the hospital. According to police reports, a few of the other individuals who were involved in the shooting were – Ajay, Prince Dalal, Sonu, Sagar, and Amit. 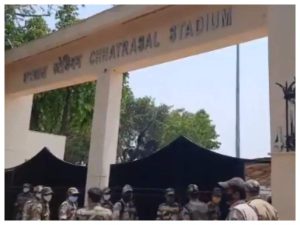 As an aftermath of this shooting spree, Sushil Kumar had an FIR of Murder (Section 302), Abduction (Section 365), and Criminal Conspiracy (120-B) of the Indian Penal Code (IPC) at the Model Town Police Station. A Delhi court issued non-bailable warrants for the arrests of Kumar and nine others. This came after the Delhi Police had already issued a “Look-Out-Circular”, or LOC, against him. On May 5, the day after the incident, Kumar made a statement that neither he nor any of his wrestlers were involved in any of the events that transpired, the previous day. He has been absconding ever since May 6.

The Delhi Police had to return empty-handed when they raided his house in an attempt to nab the world champion wrestler. On May 17, the Delhi Police announced that they will award INR 1,00,000 to anyone who can provide credible information, which leads to the arrest of Sushil Kumar. PTI reported that Kumar had already made an approach to the Delhi Rohini court, looking for protection from arrest. He had claimed that there was bias in the probe against him and that none of the injuries sustained by the victim could be attributed to him.

The Public Prosecutor, however, stated that the police had uncovered electronic evidence that incriminates Kumar and thus requested that his petition should be dismissed. The prosecutor, Atul Srivastava, went on further to claim that the champion wrestler is a ‘flight risk’. The defense attorney, on the other hand, argued that there was no necessity for custodial interrogation since as all the recoveries, that included vehicle(s), weapon(s), etc. had been made by the police. Kumar’s anticipatory bail plea was however completely rejected by the Rohini court, which had Additional sessions judge, Jagdish Kumar, presiding over it (May 18).

Also called Sushil Pehelwan by those close to him, Kumar (son of a DTC bus conductor) hails from the village of Baprola, in Najafgarh. He took up the sport after being inspired by his cousin Sandeep, who also used to be a wrestler. Sandeep gave up on his dreams so that Sushil could pursue his, as their family could only garner enough funds to support one wrestler in the family. 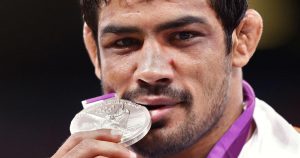 A young Sushil Kumar came to the Chhatrasal Stadium at the tender age of 14 and it was here that he met famous former wrestler Satpal Singh and became his pupil. Sushil Kumar first came into prominence in 1998, after he won the World Cadet Games in Poland. It was his bronze medal win that turned the then ‘almost unknown’ grappler into a household name, overnight. The fame and popularity of the Chhatrasal Stadium kept on increasing largely, if not only, because of Kumar, and by 2012 the Stadium had become India’s premier wrestling centre.

In the 2012 London Olympics, apart from Kumar who bagged a silver medal, his childhood friend and fellow Chhatrasal trainee Yogeshwar Dutt also brought home an Olympic bronze medal. Amit Dahiya, another trainee from Chhatrasal became the youngest Indian to compete at the Olympics at 18 years old. The Chhatrasal Stadium has been the breeding ground for several other talented wrestlers like – Bajrang Punia (a Tokyo medal favorite), Ravi Dahiya, and Deepak Punia, who will all compete in the Tokyo Olympics. Kumar’s life became even more intertwined with the stadium when he married Satpal Singh’s daughter, Savi Kumar in 2011. In the eyes of many, he did so purely out of respect for his teacher and the couple has two children.

Presently, one of the administrators of the Chhatrapal Stadium, Sushil Kumar’s problems began back in the fag end of 2012, when he had a public fallout with Yogeshwar Dutt. Following the incident, Dutt left to form his own training centre and was later joined by a senior coach from Chhatrasal, who had alleged that Kumar had assaulted him. In fact, reports surfaced about several coaches having fallouts with the former World Champion. 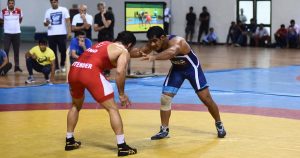 The situation worsened when in 2016 he got involved in a dispute, regarding the representation of India at the 2016 Rio Olympic Games, with the National Wrestling Federation. Maharashtra wrestler Narsingh Yadav had won a quota for India, by winning the bronze medal at the 2015 World Championships. Kumar, also training for Rio at the time, wanted a selection trial, owing to his impeccable record. The Wrestling Federation of India, however, refused to do so. He then moved his plea to the Delhi High Court, who also dismissed it. In an incredible turn of events, Narsingh Yadav later tested positive for anabolic steroids, before the Olympics. He alleged that during a national camp held in Sonpeta, his food had been tampered with, by a young wrestler from Chhatrasal. This turned into an extremely long-drawn fight, which even got the Central Bureau of Investigation (CBI) involved. Unfortunately for Yadav, in 2019, the CBI rejected his sabotage theory.

Kumar has also had an extremely ill-tempered bout in 2017 when a group of individuals assaulted his opponents, Parveen Rana, and Rana’s brother, after the national selection trials. Rana alleged that all of the assaulters were Kumar’s men. The two of them had to seek immediate medical attention at a hospital. An FIR was registered against Kumar and his men.

All of these incidents have definitely dealt a mighty blow to Kumar, but none so much as being the prime suspect in a murder case. The charges are so severe that there are already talks of him being stripped of the prestigious Khel Ratna, Arjuna, and Padma Shri Awards. Delhi Police are combing New Delhi and surrounding areas in search of the grappler who has managed to evade police detection until now. Importantly though, it must be remembered that Sushil Kumar’s involvement in the awful incident that took a young man’s life, is yet to be proven in a court of law. Hence, as of yet, he is still innocent until proven guilty. It can however be stated with certainty that the once highly revered, former World Champion wrestler’s reputation, has been tarnished forever.

Previous As PGA Championship 2021 opens at Kiawah Island, a look back to the fond memories it has given to Indian Golf
Next “It’s time now to invest in building a five-year business plan for Golf in India…..” Harish Bijoor