UPDATES
Home / TRENDING / LATEST / Tokyo Moment- She lost the gold, but her bronze sealed the name of Lovlina Borgohain in golden colour

Tokyo Moment- She lost the gold, but her bronze sealed the name of Lovlina Borgohain in golden colour

Lovlina Borgohain was 14-years-old and practicing Muay Thai back in 2012, when she got spotted by a SAI (the Sports Authority of India) boxing coach in Assam’s Golaghat district. She is the youngest of three Borgohain sisters, and started her boxing training at SAI’s Guwahati centre. The fact that this was a successful switch in sports made by her, is proved by the bronze medals she won at both the 2018 and 2019 World Championships, alongwith the one she just lifted at the 2020 Tokyo Olympic Games.

Lovlina may have lost the match against world no. 2 Busenaz Sürmeneli from Turkey, but she ensured that she gave it all that she had. Both the boxers started slow and had a cautious approach. However Sürmeneli, the defending world champion in the Welterweight category, bagged the opening round with a 5-0 score.

Lovlina tried to turn things around in the second round, but her 23-year-old Turkish opponent put up a staunch defence. On top of that Lovlina had a point deducted, when she landed a punch on Sürmeneli while the referee was separating the two pugilists, since Lovlina had already received a warning beforehand.

In the third round, Surmeneli showed all her class and experience and just held off the Indian boxer to triumph over her, via unanimous decision. The final of the event will see the Turk take on Gu Hong from China.

Borgohain has achieved a lot in the sport of Boxing. She is a 2-time medal winner at the AIBA World Championships, and achieved victory against Nadine Apetz from Germany, via split decision (3-2) in the round of 16. In the quarter-final stage, the Assamese boxer won over Chen Nien-chin from Chinese Taipei, again via split decision (4-1). Unfortunately for her, Sürmeneli was simply a class apart and it showed. Lovlina put up a brave fight, but it always seemed like too steep a hill for her to climb. 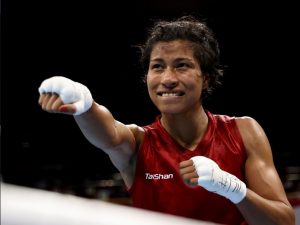 However, with this bronze medal, Lovlina Borgohain became the second female, and third overall Indian boxer to clinch an Olympic medal. Indian Boxing legend Mary Kom had lifted the bronze medal at the 2012 London Games, while back in the 2008 Beijing Games, Vijender Singh had also bagged a bronze.

After  her confirmation of the bronze medal, Lovlina Borgohain issued a statement that reads:

“It had been a wonderful journey to Tokyo Olympics. Finally my years of preparation have yielded me an Olympic medal. Although I was aiming Gold, there’s always a next time, and hopefully in the 2024 Paris Olympics.”