It was a close encounter in the event final; Ravi Kumar Dahiya settled for silver when he went down 4-7, to Zavur Uguev from Russia. Dahiya the second Indian grappler, after Sushil Kumar, to pick up the silver medal at the Olympics and the fifth Indian wrestler to win an Olympic medal. Uguev, who has won the gold medal twice at the World Championships, seemed too much of a match for Dahiya. Despite all of Dahiya’s best efforts, Uguev showed his experience and class throughout the bout and ensured that he was never overpowered at any time. 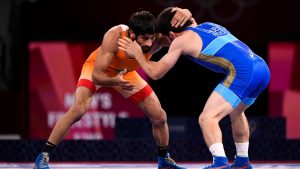 In Tokyo, Dahiya triumphed over Colombia’s Oscar Eduardo in the pre-quarters and then defeated Gerogi Valentinov from Bulgaria in the quarter-finals, by technical superiority. After that he achieved victory over experienced wrestler Nurislam Sanayev from Kazakhstan to book a place in the finals of the event. He was trailing 2-9, before pinning the Kazak in the dying moments of the tie.

This silver brings up India’s total medal tally at the 2020 Tokyo Olympics to 5 (2 silver, 3 bronze).

Previous Tokyo Moment- She lost the gold, but her bronze sealed the name of Lovlina Borgohain in golden colour
Next The men won, the eves lost; but with heads high, both scripted a turn around for Indian Hockey