UPDATES
Home / TRENDING / LATEST / Tokyo Paralympics: At 8 he lost his hand; at 21 Nishad Kumar is the proud owner of Paralympic silver medal

Tokyo Paralympics: At 8 he lost his hand; at 21 Nishad Kumar is the proud owner of Paralympic silver medal 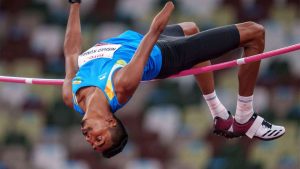 Nishad Kumar went clear of 2.06m, as did Dallas Wise from America, who shared the silver medal with Kumar in Men’s High Jump T47. American Roderick Townsend, took home the gold, after successfully clearing a world record height of 2.15m. The athletes in the T47 class come with an unilateral upper limb impairment that results in some degradation of function at the shoulder, elbow and wrist.

Nishad , who hails from Una in Himachal Pradesh, met with an unfortunate accident when he was just 8 years old and lost his right hand. He was assisting his mother at home when his right hand went into the fodder-cutting machine. Despite being taken to a hospital in nearby Hoshiarpur, his hand had to be amputated.“When Nishad recovered, he was disappointed for some time but watching sports events on television aroused interest in sports. He never saw him lesser than anybody and would often tell his mother that he will do better than normal athletes. He competed in normal categories early in his career,” recounted his father Rashpal Singh.

In the beginning Nishad used to compete in the 200m and 400m events, apart from High Jump. In 2013, he won a High Jump silver medal in the sub-junior category at the  National School Games in Patiala. In 2017 he started competing in the para category and went to Panchkula to undergo training under Naseem Ahmad. Soon after, Kumar won the silver medal in High Jump with 1.83m effort at the National Para Athletics Championship in Panchkula. In 2019, Nishad became champion at the World Para Grand Prix Championship in Dubai with a jump of 1.92m jump. Then in the same year, he went on to clinch a bronze medal at the World Para Championships at Dubai, with a jump of 1.99m. 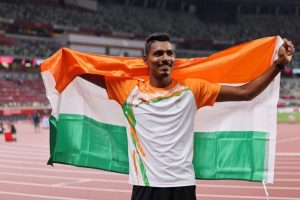 Rashpal Singh and Pushpa Kumari, Kumar’s parents, were fighting hard to hold back tears in the village of Badaun. It was a painful remembrance for them, as they recounted how young Kumar lost his hand to a fodder-cutting machine, on a fateful day, 14 years back. “As parents, whenever we remember the day when Nishad’s hand got into the fodder-cutting machine at our home, we cry. Today’s medal is the reward for his hard work. To see him hold the Indian flag and the silver medal at the Tokyo Paralympics has made us forget all the hardships“.