On a watershed day for Indian Table Tennis, 34-year-old Bhavina Patel became the first Indian para paddler to win a medal at the Paralympics, after she picked up the silver medal in Tokyo.

World Number 1 Ying Zhou of China won the final in 3 straight games. The scoreboard read 7-11, 5-11, 6-11 in favour of Zhou, at the end of the 19-minute final. But, as Bhavina Patel clinched the silver, it became a historical medal for India in the Women’s Individual Class 4 event at the Tokyo Games. 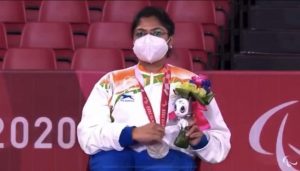 With this silver medal India also opened their medal account at the Tokyo Paralympics. It was a record-breaking run for Bhavina Patel in Tokyo as she triumphed over World Number 9, 8, 2, and 3 respectively on her way to the final. Her only other loss in the whole tournament, had also come against Zhou in the group stages. However, Bhavina went on a rampage after that.

The Paralympic debutant defeated Brazilian Joyce de Oliveira, currently World No. 8 in 3 straight games : 12-10 13-11, and 11-6, in the round of 16. Then in the quarters she shot down 2016 Rio gold medallist and World No. 2 Borislaca Peric of Serbia, also in three straight games : 11-5, 11-6, 11-7, in just 18 minutes. In the semis she put up a valiant display against World Number 3 Miao Zhang from China, and won the match 7-11, 11-7 11-4, 9-11, 11-8. The victory against Zhang was even more sweeter, since Bhavina had never defeated her in any previous encounter. Going up against the ruthless Zhou in the finals, was always going to be a tough ask, and the Chinese paddler showed why she is ‘numero uno’ in the world. She never even let Bhavina get any kind of rhythm and kept the pressure on the Indian, all throughout the match. Her dominance was clearly reflected, when she finished the game off in 3 back to back games in less than 20 mins.

“I dedicate this medal to those who supported me, PCI, SAI, TOPS, Blind People Association and to all my friends and family. This medal is also dedicated to my coach who always supported me and gave hard training for which I could reach this stage. Special thanks to my physio, dietician, sports psychologist. They are who always motivated me.” 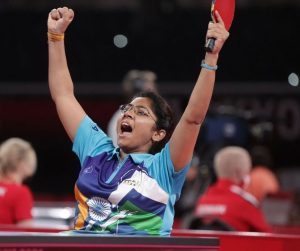 Born on 6th November 1986, Bhavina Patel has already represented India in a total of 28 international tournaments, which include the World Championships, the Thailand and Japan Open. She has 5 gold medals, 13 silver medals, and 8 bronze medals in her kitty and presently holds the World No. 12 rank. With this silver medal she became the second-ever female athlete to win a medal at the Paralympics, after Deepa Malik won silver in Shot Put, in Rio 2016.

Athletes in the Class 4 category, not only have fair sitting balance, but they also have completely functional arms and hands. Their impairment can be caused by a lower spinal-cord lesion or even cerebral palsy. Bhavina was diagnosed with polio as a mere 12-month-old. It affected her mobility, in the lower half of her body. She has also had to face severe financial crisis on various occasions in life. But she was never ready to give up. For her, the mind triumphs over everything.

“You need to train your mind to be victorious. Then everything falls into place. Whether you are disabled or not, I would give the same advice: Never ever underestimate yourself. Each one has a unique talent, which can be brought out and honed.”

She had moved to Ahmedabad back in 2004, from her native village Sundhiya, in the Mahesana district of Gujarat for better facilities. Fortunately for her, the BPA or the Blind People’s Association (BPA), an Ahmedabad-based organisation, came to her aid and extended their support. She has also recently secured a job with the Employees’ State Insurance Corporation in the sports quota.

It was a scene of complete euphoria in Bhavina’s native Sindhiya village, after her match against Zhou ended. Her friends and family broke into a jubilant bout of the traditional “Garba” dance. There had been a huge screen set up so that everyone could watch the final together. Villagers had started gathering in front of it from early in the morning to ensure that they would not miss even a single second of the final. The love and admiration they have for Bhavina was clear from their words,

“As you can see, we have been playing Garba since this morning after Bhavina won the silver medal. We are making full preparations for her grand welcome,” said a relative if the paddler.

Despite her loss in the final of the Paralympics, there was no dampening the celebrations, with people bursting firecrackers and smearing each other with ‘Gulaal’, as soon as the final ended. A beaming and proud Hasmukh Patel, Bhavina’s father, who runs a small grocery shop in Sundhiya, was heard saying, “She may be ‘divyang’ (differently-abled), but to us, she never appeared to be so. For us, she is ‘Divya’ (divine). We are very happy that she has brought a silver medal for our country,”

Bhavina Patel made sure that the whole world would have to sit up and take notice as she went rampaging through the Tokyo Paralympics, defeating higher-ranked adversaries left, right, and centre. Surely every person in the country is feeling proud to be an Indian, thanks to a certain Bhavinaben Hasmukhbhai Patel.

Previous Tokyo Paralympics: At 8 he lost his hand; at 21 Nishad Kumar is the proud owner of Paralympic silver medal
Next Tokyo Parlympics: Avani Lekhara hits the bull’s eye; becomes the first Indian woman to win gold in Paralympics