The Indian contingent at the Tokyo Paralympics stunned everyone by putting in astellar performance. India secured their highest-ever tally at the Games with 19 medals, including five gold, to claim the 24th spot. 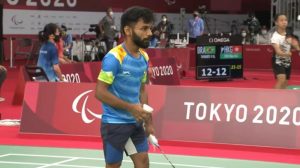 Nagar, who has a short-stature impairment, became the second Indian to win a Paralympic gold in Badminton. He dedicated the win to his parents, coaches and Almighty, saying that it is a dream come true for him.

“This is the first time that Badminton has been added to the Paralympics and I hope India will keep winning and doing their best in upcoming Games.”

The Indian made a strong comeback to trail by a solitary point at 15-16. Man Kai increased the lead to 2 points, at 17-15, and appeared to be the likely winner of the first set. Nagar, however, had other plans. Keeping the rallies short with quick footwork, he won six points in a rowand took the first set in just14 minutes (21-17).

With a convincing 21-16 win in the second set, Man Kai seemed to be brimming with confidence. However, in the third game, Nagar managed to hold his nerve against a resistant Man Kai and took a 19-16 lead. In the end, Nagar took the third set in just 15 minutes with the score reading 21-17 in his favour.

In the SL4 event, Yathiraj went down fighting to top-seeded Lucas Mazur of France for a historic silver. The French World No. 1 had to earn his medal against a spirited Yathiraj, who put up a dazzling display. But the experience and skill of Mazur came through as he won the contest after losing the first set,with the score reading 15-21, 21-17, 21-15.

It was a hard-fought encounter and Yathiraj, who has an impairment in one ankle, had to be content with silver. 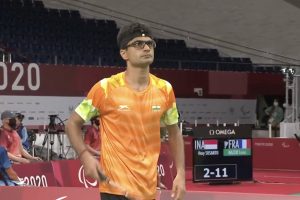 In the beginning, Yathiraj shocked Mazur and won the first game. He showed terrific skill and dominated his French opponent. He also held handy leads at the beginning of the second and third games as well.

Mazur found his rhythm in the second half of the second set and won 21-17 to take the match into the decider. Yathiraj again raced to4-0 at the start of the third set with Mazur looking exhausted.

The Indian shuttler was 11-10 at one point but faltered at crucial points as his aggression got the better of him. This is when Mazur’s experience and guile came into play. The Frenchman held nerve, used his left-handed angles and end-game poise togood effect and won the third set 21-15 to secure gold in a little over 60 minutes.

Earlier on Saturday, Yathiraj outclassed Indonesian Fredy Setiawan 21-9, 21-15 in 31 minutes to storm into the final. Incidentally, the 38-year-old Yathiraj is the district magistrate of UP’s Gautam Buddh Nagar and became the first IAS officer to bag a medal at the Paralympic Games.