The UN General Assembly urged all nations to observe a truce during the Beijing Winter Olympics 2022 starting in February 2022. 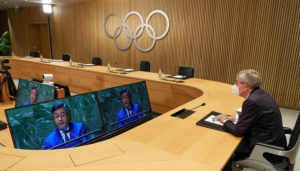 A resolution is adopted by consensus by the 193-nation world body that calls for an ‘Olympic Truce’ to encourage a peaceful environment and ensure safe passage and participation of athletes in the Games. It urges the members a halt to conflicts during one of the world’s premiere sporting events that can be “a tool to promote peace, dialogue and reconciliation.”

The Winter Olympics will run from 4th-20th February 2022  followed by the Winter Paralympics from 4th-13th March 2022 in Beijing.

The General Assembly revived such calls for an Olympic Truce in 1993 after an appeal from the International Olympic Committee allowed athletes of war-torn Yugoslavia, which was on the brink of breaking up, to participate in the 1992 Barcelona summer games.

Previous Shradhanand Tiwari- the young Indian making headline during quarterfinal of Junior Hockey World Cup
Next The RYP National Ranking Pickleball Tournament is back; the 2nd edition promises to be bigger and better