Shradhanand Tiwari, the young talent of Indian Hockey, converted a penalty corner to score the only goal in the quarter final encounter between India and Belgium at the Junior Hockey World Cup.

The son of an escort driver of Lucknow’s District Magistrate, Shradhanand Tiwari has already been regarded as a penalty corner specialist. The 18-year-old, who hails from Simarpreet Pur village lives with his family in a 20X80 square feet government accommodation. He is third in line among a quartet of siblings. His father Ganga Prasad Tiwari, who is 55-years-old, unfortunately was on official duty when his son scored the winning goal for India to take the nation to the semi final of the World Cup .

“I was on night duty when my youngest son Rahul called on the phone and informed me about the golden goal. It made me so proud,” said a proud Ganga Prasad. 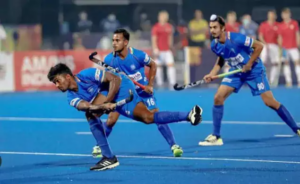 In the 20th minute of a hard fought match against Belgium, Tiwari had a clear sight of goal and successfully converted his chance. An ecstatic Shradhanand Tiwari said after the match, “The faces of my parents flashed in front of my eyes as I focused and converted the penalty into a goal,”

Shradhanand’s mother, 47-year-old Rani Tiwari was found recounting her son’s Hockey journey till no. The family settled in Lucknow city more than a decade ago when their financial condition was pathetic. Shradhanand supported his father by working as a porter at a Hazratganj grocery store for Rs 200. After his working hours, he practiced Hockey but did not have proper shoes, protective pads or a stick. But a talented lad like Tiwari just proved himself in front of senior coaches.  Neelam Siddique, the Hockey coach and wife of Rashid Aziz Khan (hockey coach for Sports Authority of India in Chhattisgarh), spotted Tiwari and asked him to invest more time in Hockey.

He honed his skills at SAI-Academy, Lucknow, and got a chance to play at the Junior National Championship 2019 (A Division), where his team Uttar Pradesh clinched the silver. After that, he got selected for the junior national camp.

After his selection in the Junior Indian Hockey team for the World Cup, his coach gifted him a pair of shoes. Time has changed for Shradhanand and his family. Hockey has given him the much needed recognition and helped him and his family overcome various challenges that has brought a stability in their life.