UPDATES
Home / TRENDING / LATEST / With the ‘Inclusion’ of Laurel Hubbard as the first transgender Olympian, IOC’s principle of ‘Sport is a Human Right’ emphasised

With the ‘Inclusion’ of Laurel Hubbard as the first transgender Olympian, IOC’s principle of ‘Sport is a Human Right’ emphasised

The name of Laurel Hubbard absolutely blew up on the internet when she was selected by New Zealand, to compete in the Women’s Weighlifting at the 2020 Tokyo Olympics. This will make her the first-ever openly transgender athlete to compete at the Olympics.

You would be hard-pressed to find much, if anything at all, about Gavin Hubbard who in 1998 achieved the New Zealand Junior Record in Weightlifting– Snatch 135 kg and Clean & Jerk 170 kg in 1998- the record that was finally broken in 2018. But at 23 in 2001, Gavin ceased lifting as he felt himself a misfit in this world.

“It just became too much to bear … just the pressure of trying to fit into a world that perhaps wasn’t really set up for people like myself”.

Gavin Hubbard came out in 2013 as a transgender; he transitioned to female to become Laurel Hubbard. After going through a series of cross-hormonal operations, Laurel ultimately found herself to be the one whom ‘he’ always searched for. 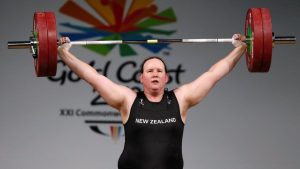 The transition brought back Hubbard the sportsperson and made her confident to participate in international competition. It was in 2017 that Hubbard first competed in international Weightlifting, marking a massive milestone for transgender participation in sports.

At the 2017 World Masters Games, Hubbard competed at the heaviest 90 kg+ category, winning gold medal in both Snatch and 145 kg Clean & Jerk. This meant she held the record for being the first transgender woman to be the winner of an international Weightlifting title while representing New Zealand.

“To be honest, I had to wait until the world changed before I could really compete again, and I’m grateful that it has. I’m not here to change the world; I just want to be me and just do what I do.” 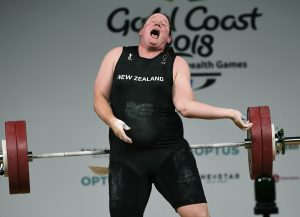 After her brace of gold in 2017, Hubbard qualified for the 2018 Commonwealth Games. The Australian Weightlifting Federation was staunchly against Hubbard’s participation in the tournament and vehemently tried to stop her. Fortunately, for Hubbard, the move was rejected by the Commonwealth Games organisers. Hubbard participated but had to withdraw her name from the competition, despite leading the playing field, when she sustained a grave injury to her arm.

However, Laurel showed grit and perseverance and returned to the world stage just within a year after that significant injury. She won two gold medals at the Pacific Games, held in Samoa but not before the Samoa 2019 Chairman and the then Samoan Prime Minister created a similar hullabaloo in respect to her participation.

On the 21st of June, 2021 New Zealand announced her name in the list of women who would feature in their Weightlifting contingent travelling to Tokyo. Hubbard’s participation in the Olympics as a transgender athlete only became possible owing to the changes made by the International Olympic Committee (IOC) to the transgender guidelines back in 2015.

On the basis of these guidelines a transgender athlete can compete as a woman if their total testosterone levels remain below 10 nanomoles per litre for at least 12 months. Laurel Hubbard met all the guidelines related to transgender participation in the Olympics.

However, the IOC’s decision has faced a lot of outrage from a number of eminent sports personalities. Prominent athletes like Belgian weightlifter Anna Van Bellinghen and former Olympic weightlifter Tracey Lambrechs of New Zealand are of the opinion that letting a transgender woman compete in the women’s event would snatch any athletes dream of participating in the Olympics.The decision is against gender equality.

Their concerns are not baseless, as the determining factor of 10 nanomoles/litre of testosterone is at least around 5 times in excess of the amount in a biological woman. According to a research by scientists Emma Hilton and Tommy Lundberg, transgender women, even after suppressing their testosterone for 12 months, only experience a total loss of around 5% in terms of lean body mass, muscle area and strength.

However, the IOC issued a statement saying its guidance was being reviewed and was being informed on the basis of “new developments, data, research, and learning in the scientific and human rights sectors.”

Hubbard has also found support in the form of the New Zealand Olympic Committee chief executive, Kereyn Smith, who said that the decision of selecting Hubbard for the Olympics after she met the IOC eligibility criteria was the correct one. She also admitted that the debate raging between fairness and inclusion would always be a tricky one, “We acknowledge that gender identity in sport is a highly sensitive and complex issue requiring a balance between human rights and fairness on the field of play.” 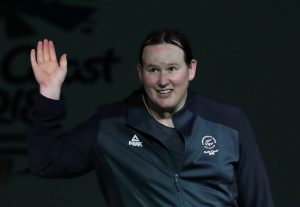 Laurel Hubbart’s participation as the first transgender athlete in the Olympics aligns with the ‘non discrimination’ clause of the Olympic Movement. Inclusion, diversity and equality are all integral components of the IOC, as is reflected in the Olympic Charter, Fundamental Principle 4: “The practice of sport is a human right. Every individual must have the possibility of practising sport, without discrimination of any kind and in the Olympic spirit, which requires mutual understanding with a spirit of friendship, solidarity and fair play.”

Laurel Hubbard and her ‘Inclusion’ might have created arguments, disagreements and controversies; but her participation is surely going to be a ‘game changer’. History has already been created and if Hubbard manages to win a medal then it will double its effect.

Hubbard almost never gives interviews anymore to the media. Back in 2017, on being asked about the struggles and criticism she faces for competing in the women’s category of the sport, as a transgender athlete, Hubbard had told the Stuff news website-

“All you can do is focus on the task at hand and if you keep doing that it will get you through. I’m mindful I won’t be supported by everyone but I hope that people can keep an open mind and perhaps look at my performance in a broader context.”

Previous The sacred Olympic Torch that tells the tale of hope, happiness and humanity
Next “There is a stark contrast in the way the athletes are entering this Olympics compared to the previous ones”: Mreenal Chakraborty