The sacred Olympic Torch that tells the tale of hope, happiness and humanity

The extremely popular and historically important Olympic Torch Relay has seen many alterations and exemptions in 2020 Tokyo Olympics due to COVID pandemic; but the ever-burning flame eternally glows to represent a tale of happiness, hope and humanity.

History tells us how Prometheus stole fire from the gods to give it to humanity. However, he was punished but from his sacrifice, fire got a divine connotation.

The Flame at Olympia 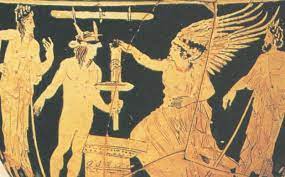 In ancient Greece, when the Olympics was held at Olympia, a sacred fire was kept burning throughout the entire sporting celebration. The Ancient Olympics, that historically had its inception back in 776 BC, was a part of the Greek religious festival for Zeus– the king of the gods on Mt. Olympus.  In addition to the continuous burning of the sacred fire, there were also additional fires that lit up the temple of Zeus and his wife Hera at Olympia.

This Greek-Pagan festival gradually lost its importance with the Roman invasion of Greece. As the Roman rulers started to embrace Christianity, they strongly condemned Pagan religion. This state took a massive turn when Theodosius became the Roman king. He made the festival at Olympia illegal, thus bringing an end to an immensely popular Greek socio-tradition.

The Flame in Modern Olympics 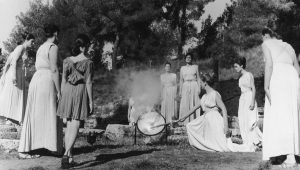 After nearly 1500 years, the Olympics were reinstated in Greece in 1896 with the term of Modern Olympics. But there was no Olympic flame in the first few editions of the Modern Games. It was in 1928 Amsterdam Olympics that the tradition of lighting the Olympic flame was reintroduced. An employee of the Electric Utility of Amsterdam was invited to light the flame in the Marathon Tower of Amsterdam.

At the 1932 Los Angeles Olympics, the lighting of the flame took place at the top of the gateway to the Olympic stadium. But on both the occasions the flame was lit just to add significance to the beginning of the Games.

It was in 1936 Berlin Olympics, known as the Games of the XI Olympiad officially, Carl Diem – the German sports administrator of the Nazis, brought forward the idea of an Olympic Torch Relay. He proposed that the relay should start from Olympia in Greece, in order to bring back the flavour of Olympics to its original birthplace. 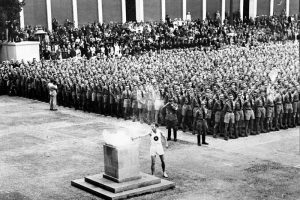 On the 20th of July 1936, amidst the ruins in front of the altar of Hera at Olympia, the Olympic flame was lit naturally from a parabolic mirror reflecting the bright Sun rays. Greek runner Konstantinos Kondylis ran the first steps to carry the first Olympic Torch in 1936 that travelled for 12 days to reach Berlin from Olympia.

Since then the Olympic Torch Relay has become a ritual in the Olympic tradition. It starts in an idyllic way of lighting up the Torch using a parabolic mirror by the warm rays of the midday Sun. Eleven women, representing the Vestal Virgins, dressed in archaic-style clothing do the honour. The Torch tours around Greece and is then handed over from the prior Olympic city to the host city at Panathenaic Stadium at Athens.

Adolf Hitler was always an admirer of the ancient Greeks and believed that the Nazis were their true heirs. The Nazi Party utilised the Torch Relay as an extremely powerful tool of Hitlerish propaganda. It apparently bound the Ancient and the Modern Olympics but Hitler actually tried to propagate that his Third Reich had an eternal bond with the Ancient Greece.

A German arms manufacturer named Krupp had crafted the Torch, which encased a hidden magnesium-burning element of German design, which allowed them to remain lit in any weather condition. Germany’s Zeiss Optics manufactured the parabolic mirror, and finally an Opel car which carried an additional Olympic flame followed the torchbearers.

There was widespread German media coverage of the Torch Relay, which included radio reports directly from the relay route. Moreover, director Leni Riefenstahl was entrusted the duty of filming it as a segment of the Nazi propaganda film Olympia. Riefenstahl was unhappy with the actual lighting at the ceremony in Olympia and felt that Kondylis did not bear resemblance to an ideal of Olympic torchbearers. So she went the extra mile to bring in a different relay runner to Berlin post the conclusion of the Summer Games to stage the version of the torch lighting that appears in the movie. 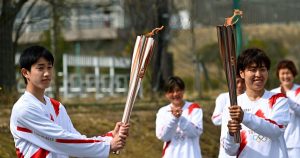 The Olympic Torch relay has incredible historical significance and has become a spectacle in itself, with millions from all corners of the planet tuning in at some point, to catch a glimpse of it at least. However, even this historic tradition is not exempt from the clutches of the ongoing Covid-19 pandemic. The 2020 Tokyo Olympic torch relay has already seen a handful of people who assisted with the relay, falling prey to the disease. A number of people, including celebrities, are having second thoughts about taking part in the relay. A significant loss for the relay was 118-year old Kane Tanaka, presently the oldest person on the planet, who has taken her name out of the list of 10,000 relay runners. The officials have been forced to make several alterations to the relay route, including having to pull the relay completely out of Hiroshima.

Despite the novel Coronavirus making its presence felt it has not been able to completely curb the relay, which like the Olympic flame, will arguably never ever die down.

Previous “……I wasn’t even scared of my death….”- Milkha Singh completes his ‘Race of Life’
Next With the ‘Inclusion’ of Laurel Hubbard as the first transgender Olympian, IOC’s principle of ‘Sport is a Human Right’ emphasised