The Jawaharlal Nehru Stadium in New Delhi was witness to the first-ever presentation of Sports Authority of India (SAI) Institutional Awards, for Athletes and Coaches.

A grand total of 162 athletes and 84 coaches, were conferred the awards in the Outstanding Award and the Best Award category for the performances they have put in, in national and international competitions. Anurag Thakur, the Union Minister of Youth Affairs and Sports, along with Nitish Pramanik, Minister of State for Youth Affairs and Sports, Sujata Chaturvedi, Secretary-Sports, and multiple officials from the Sports Ministry graced the awards ceremony with their presence. 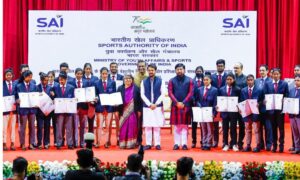 The awards acknowledged the incredible performances that the SAI athletes and coaches have put in, under several sports promotion schemes, at both the national and international levels since 2016. As a result, the awards were conferred on the deserving candidates for the years of 2016-17, 2017-18, 2018-19 and 2019-20. The categories of awards were “Outstanding Award”, granted for National level achievements, and “Best Award”, granted for International level achievements.

A total of 19 athletes and two coaches were awarded from Assam. Olympic bronze medallist, Lovlina Borgohain was one of them. Karate coach Sunita Chanu and Taekwondo coach Tamas Sethi were also awarded the Outstanding Award.

The selection committee consisted of senior SAI officials, and a number of eminent sports persons as well. They were the ones responsible for streamlining the nominations that came in from the Regional Directors of the numerous National Centers of Excellence.

The Twitter handle of SAI Media read, “The Gems of SAI, our inspiration, motivation and biggest Support system of our small family. Here are some glimpses from the event hosted to honour their contribution to #IndianSports. Congratulations to all the Recipients of SAI Institutional Awards”

Anurag Thakur also said that the importance of sports is a lot more owing to it being an integral part of the National Education Policy. He expressed his happiness over sports becoming a part of the aforementioned policy, since it ensures that sports is now a part of every student’s life. According to him, the sporting achievements of any student, when they are announced in his/her school, inspire other students to look beyond academics and also try to include sports in their lives.

Previous FIFA World Cup: Argentina qualify for Qatar 2022 after goalless draw with Brazil
Next Racial Abuse: Lilian Thuram believes that the white players remaining neutral is not an option for things to advance