UPDATES
Home / TRENDING / LATEST / Racial Abuse: Lilian Thuram believes that the white players remaining neutral is not an option for things to advance

Racial Abuse: Lilian Thuram believes that the white players remaining neutral is not an option for things to advance

Now 49, Lilian Thuram has played for Football clubs like Monaco, Juventus and Barcelona during an illustrious career, and was one of the best defenders of his time. Despite being born in Guadeloupe he moved to France when he was nine. He later represented the French national team on 142 separate occasions, and lifted the World Cup in 1998.

For him, shifting to France and then being racially abused by other kids at school was initially when he became conscious that he was only looked at as a Black person in society. He also said that he was subject to racist abuse, including monkey chants, all through his playing career. The most of that being after he signed for Italian club Parma in 1996.

The French Football legend believes that the day White players decide to walk off, institutions will be forced to find solutions to the problem of racism. In his words, “If you stop the matches, you stop the business — and football is, above all, a business.”

In his recent book, White Thinking: Behind the Mask of Racial Identity, Thuram addresses the manner in which societal norms are still prevalent, and divide people and fuel systemic racism. He believes that education is the answer to curbing the issue in a more meaningful way. There have been a lot of incidents of racism all through global Football. Players have been abused not only on the pitch, but also on social media platforms. In the recent past, the entire German Olympic Football team simply walked off the pitch during a friendly against Honduras after one of their players had to face racial abuse, according to the German Football Association or DFB.

Thuram has urged athletes to stop being complicit and to carry on with using their platforms, and be activists for social causes. He also said that it is needed to understand that everyone has a role to play. According to him, people must have the courage to denounce injustices. As the number of people demanding change starts increasing, it will force the institutions to change as well. On the back of multiple high-profile incidents in 2019, UEFA introduced a 3-step protocol for referees to combat racism in the stadium. It gave the officials the option to even abandon the game “as a final resort”, in case the racism continued after the match had been restarted for a second time. Meanwhile, FIFA has announced that it is constantly working with the EU Commission to eliminate discrimination from the beautiful game.

Earlier this year, FIFA president Gianni Infantino was quoted as saying,  “There is no place for racial discrimination in football or in society.” 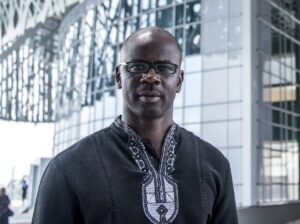 Since his retirement in 2008, Thuram’s son, Marcus, has also followed in his footsteps into the pro game. He was one of the several players who took a knee during a game, to pay their respects after the horrific demise of George Floyd in 2020. In fact, English Premier League clubs have continued the tradition of taking a knee before each game in order to raise awareness of discrimination. For Thuram it is very exciting that a large percentage of young players took the knee, after Floyd’s death. He feels that that is something extremely important because they are the ones who enact the change.

Thuram also heaped praise on White players including Liverpool captain Jordan Henderson for addressing the subject of racial injustice. He is well aware that the issue of racism is also prevalent in a lot of other sports. He believes it to be important for sponsors and clubs to not abandon those who speak out against it.

“We must talk with the players, educate the players so that they know they have real power over the decisions that institutions can take to combat racism,” he added.

Previous 246 athletes and coaches are granted the first-ever Institutional Awards by SAI for excellent performances
Next Junior World Cup Hockey 2021: India to start campaign against France