UPDATES
Home / TRENDING / FLASHES / As Eriksen collapsed, Football fraternity united, but the moment brought back memories of some heartbreaking incidents

As Eriksen collapsed, Football fraternity united, but the moment brought back memories of some heartbreaking incidents

The UEFA Euro 2020 is underway; however, disaster struck when Danish superstar Christian Eriksen collapsed to the ground in the Group B match. Latest report shows that Eriksen is recovering but his collapse brought back to our memories some tragic incidents on Football ground.

The match between Denmark and Finland was well underway and was nearing the end of the opening half when Inter Milan star, Christian Eriksen suddenly went crashing down, as the ball was thrown in towards him. It took a couple of moments for the players and officials on the pitch to get a grip of what was actually going on. Referee Anthony Taylor must be given credit for immediately halting the game and calling for the medical staff to rush to Eriksen’s aid. 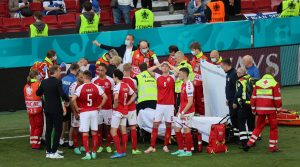 The Danish players grouped around their fallen comrade, with several of them miserably failing to hide the looks of sheer horror from their faces. The accident happened so suddenly that no one even had an inkling of what was about to happen, and no one got any time to prepare.

The medical staff went to battle to try and get the Inter Milan star to regain consciousness. There was a sense of an eerie chill traversing the stadium. No one had complete information of exactly what was going on with Eriksen. The Danish supporters were seen standing trying to get a better look at what was going on with their midfield maestro.

The beauty and passion of Football were on vivid display and it was clearly visible why the sport is said to break down barriers and bring people together. Even a large number of the Finnish supporters could be seen horror struck by the heart-wrenching images in front of them. Managers of both the teams could be seen in deep conversation with referee Anthony Taylor, visibly shaken and concerned about the medical situation of Eriksen.

The medical staff could be seen giving chest compression to the Dane and administering CPR, as they kept on giving everything they had to make sure that the midfield maestro opened his eyes again. As this was going on, the Danish players, led by their captain Simon Kjaer, formed a wall around their fallen comrade. Kjaer deserves a special mention here since it was the captain who ensured that Eriksen was in a “recovery position”, till the medical team were able to reach him and administered the first dose of CPR.

Eriksen’s partner Sabrina Kvist Jensen had somehow found a way onto the pitch. It was Keeper Kasper Schmeichel who on noticing her there went to her and consoled her. He was soon joined by captain Kjaer and both the players put on the bravest faces possible for them at the time, as Jensen broke down completely in their arms. 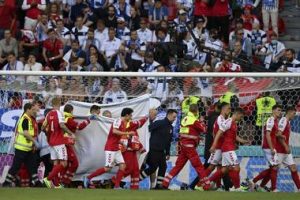 As more and more time elapsed without any good news trickling through, many people started to fear the worst. However, the medical team was not ready to give up and after an extensive treatment process that continued for around 20 minutes, Eriksen was finally stretchered off the pitch and to the sheer delight of every person present in the stadium, he could be seen with his eyes open, lifting his head.

The 29-year old was immediately rushed to the hospital where he was stabilised. The news of Eriksen being stabilised in the hospital reached the roughly 16000-odd spectators like a wave of incredible joy and each of them deserved it thoroughly. They had set an incredible precedent when they again bridged the divide of competition when all the Finnish fans started chanting “Christian” in unison, with all the Danes in the house replying with a roar of “Eriksen”. The atmosphere reached such a crescendo that it is sure to have left a hugely lasting effect on whoever was present in the Copenhagen stadium.

UEFA had originally announced that the match would be suspended. News later percolated through that not only was Eriksen stable, he had also called his teammates via Facetime and had convinced them that they should finish the game, even though he would not be able to join them. UEFA confirmed that the match would recommence by issuing this statement, “Following the request made by players of both teams, UEFA has agreed to restart the match between Denmark and Finland tonight at 20:30 CET (TBC). The last four minutes of the first half will be played, there will then be a 5-minute half-time break followed by the second half.” The match restarted again after a stoppage of around ninety minutes.

Finland went on to win the match in the end, thanks to a solitary goal scored by Joel Pohjanpalo, in the 60th minute. After the conclusion of the match, Denmark’s Foreign Minister posted this tweet “Tonight’s match will never be forgotten“. He also thanked the Finns for their inspirational behaviour and chants, by tweeting, “You embody the very essence of FairPlay!“, and added a “Kiitos!“(“Thank You” in Finnish).

Even after surviving a harrowing ordeal, the problems of Christian Eriksen are far from over. Not only is there a big question mark over his footballing career, which might be cut short at 29, he might also be banned by the Italian ‘law’ from ever playing professional Football in Italy again. According to Italian law, if any person has a significant cardiac issue, they are banned from playing professional sports again. In case the suspicions that he suffered a cardiac arrest, are proved to be true, he will be banned from playing Football in Italy ever again.

Despite having to go through so much, Eriksen can consider himself to be lucky, as some of the best medical staff were present on the pitch when his collapse happened. Football has a dark side and there have been players who have collapsed before and never came back up.

The Cameroonian had signed for Manchester City in 2002. On the 26th of June 2003, Cameroon faced Colombia in the semi-finals of the FIFA Confederations Cup at the Stade de Gerland in France. Foe collapsed in the 72nd minute and had to be stretchered, after failed attempts of reviving him on the pitch. Despite being alive when he reached the stadium’s medical centre, he passed away soon after, at the age of 28.

The Hungary striker kneeled over in pain while playing for Portuguese side Benfica against Vitoria Guimaraes in January 2004. He then fell backwards onto the pitch after a heart attack. He was rushed to hospital, doctors tried to revive him for nearly 90 minutes before he was pronounced dead.

Cristiano Sebastiao de Lima Junior joined Goan club Dempo in 2004 after a wonderful successful season with East Bengal in 2003. In October 2004, during a match against Mohun Bagan goalkeeper, he collided with the goalkeeper while trying to score a goal. There were no doctor in the stadium and Junior never got up.

The Spanish wing-back, who signed for Sevilla, collapsed on the pitch, 35 minutes into the first game of the season, against Getafe at the Ramon Sanchez Pizjuan Stadium, in August 2007. He breathed his last three days later, in the hospital, owing to multiple organ failure, caused by prolonged cardiac arrest.

The year 2007, also claimed the life of the Motherwell captain, in the month of December. O’Donnell collapsed right as he was about to come off, in a match against Dundee United. The midfielder was 35 years old.

The Ivory Coast international enjoyed a great career with his most notable stint at Newcastle United. He was a star when he joined the Chinese League in 2017. During a regular training session, Tiote just fainted. He passed away on 5th June 2017, after he was taken to the hospital.

Previous Dueball: Say ‘hello’ to this thrilling ‘Made in India’ sport
Next Leander Paes: On his 48th birthday, let’s look back to his incredible journey that perhaps will end soon