While the million-dollar ‘breakaway’ European Super League collapsed due to backlash from the Football fans, in India the displeasure of the huge fanbase of Mohun Bagan could not stop the club’s merger with ATK. This incident clearly shows the huge difference between the importance of Football fans in Europe and India.

Chelsea FC, one of the top Football clubs in the English Premier League, has faced vociferous backlash from fans worldwide. This backlash came as a direct reaction to the Blues signing up to be one of the clubs that would join the proposed “breakaway” league titled, the European Super League.

The 12-team league would have consisted of England’s so-called “big-six”, including Arsenal, Chelsea, Liverpool, Manchester City, Manchester United, and Tottenham. The remaining six slots would be filled by Italy’s AC Milan, Inter Milan, and Juventus, followed by Spain’s Atletico Madrid, Barcelona, and Real Madrid. The reaction of the fans was so severe, that Chelsea reversed their decision within 48 hours of signing up for the League. 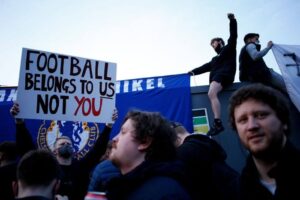 Also, it’s not just Chelsea who have been facing stick from their fanbase. Each of the remaining English Premier League giants who had signed up for the proposed League has faced similar uproar from their respective fanbases. Both Chelsea and Manchester United have seen their supporters protesting at their stadiums, with a group of the Red Devils’ supporters even storming their way into The Old Trafford (United’s Stadium), forcing the match between Manchester United and Liverpool to be postponed.

To perform some form of ‘damage control’, Chelsea FC has announced that fans will be included in the club’s quarterly board meetings. The football club recently released a statement that read – “Three supporter advisors, picked through an election and selection process, will attend board meetings to ensure general supporter sentiment is considered as part of the club’s decision-making process.”

It also said that – “The club will now consult with the Fans’ Forum and several non-official supporter groups to discuss the club’s proposed process for picking the three supporter advisors.” 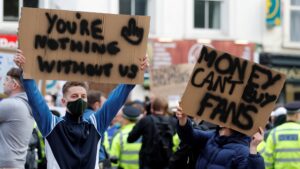 This is Chelsea making a bold statement in trying to regain the trust of their fans by ensuring that they have a say in the direction in which the club should move forward. It is, however, important to note that the three selected ‘supporter advisors’, who will be present at the board meetings from July 1, will not have any voting rights.

Despite that fact, with all the big clubs issuing public apologies to their fans and Chelsea going out of their way to include supporters in the club’s board meetings directly, clearly shows the importance of fans in the eyes of a few of the leading Football clubs in the world.

This is in stark contrast, to arguably the biggest merger in the history of Indian Football, with Mohun Bagan, the most illustrious football club of the country, merging with the relatively new, RPSG Group-owned ATK Football Club.  Mohun Bagan, even with their incredibly rich 130-year-old heritage, has had to bow down to the immense pressure exerted by muscle-flexing corporate behemoths. 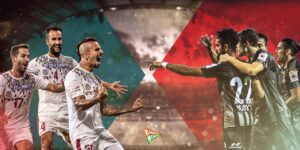 Back in January 2020, when the merger was announced by the two clubs, it sent alarm bells ringing across the footballing community of the whole nation. Mohun Bagan would go on to sell 805 shares to the ISL Franchise, thus handing over 80 percent of the stakes and retaining only 20 percent. The new team was re-christened as “ATK Mohun Bagan” and now plays in the ISL, the latter being probably the main reason behind the Mohun Bagan officials accepting the merger.

Now, while many Mohun Bagan fans accepted the decision as the way to the future, owing to the considerable influx of cash and infrastructure that the merger was going to bring to the club, a large part of the fanbase was severely disgruntled by the decision. An 80 percent control over the board meant that ATK would virtually call all the shots of the club, including the selection of the players and coach. This was unacceptable for the supporters of a Football club, which in 1989 was titled the “National Club of India”, by Rajiv Gandhi, the nation’s Prime Minister at the time.

When the news of the merger started gaining traction, a sizable chunk of the green-and-maroon brigade took to social media, especially Twitter, to voice their immense displeasure at the decision. The outrage of the fans was clearly evident when ex-captain of the Indian National Cricket Team and stakeholder of ATK, Saurav Ganguly took to Twitter to congratulate the two teams on the merger. His Tweet, which read – “A momentous partnership for Bengal Football. I have no doubt ATK and Mohun Bagan will be torchbearers of moving Indian Football forward together. @IndSuperLeague.”, was met with a large number of unhappy fans posting angry replies. 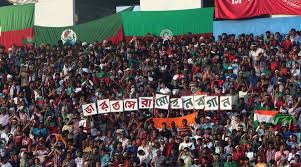 However, much to their dismay, the merger continued on track with it finally being officially announced on the 16th of January, 2020. Unfortunately for the fans who were not on board with this, the club officials made no attempt to even address their disappointment, and/or difference of opinion(s), and simply went on with the merger anyway.

Time has passed and the new club, “ATK Mohun Bagan”, has completed their first season in the ISL, finishing level on points with table-toppers Mumbai City FC. Mumbai went on to lift their maiden ISL trophy, beating ATK Mohun Bagan in the final.

The good performances in the league have definitely helped close up a few of the open wounds. But, supporters always build the fabric of any Football club. When this global COVID-19 pandemic is finally over, and the gates of the stadiums are open to the fans again, the supporters will definitely let the club officials know of their opinion on the merger. It is an open secret that ATK’s owner, the RPSG Group, wanted to take advantage of Mohun Bagan‘s mammoth fanbase and only time will tell how successful they were in doing so.

Previous ‘Inheritance of athletic ability’: An overview on the influence of genetic background in sports performance
Next To happen or not happen- the question looms large on Tokyo Olympics