UPDATES
Home / TRENDING / FLASHES / Leander Paes: On his 48th birthday, let’s look back to his incredible journey that perhaps will end soon

Leander Paes: On his 48th birthday, let’s look back to his incredible journey that perhaps will end soon

On the 17th of June 1973, in the heart of Kolkata was born the man who would later on go on to be dubbed the “Indian McEnroe”. Son of Dr. Vece and Jennifer Paes, Leander has gone on to become India’s most successful Tennis player and one of the greatest Tennis players in doubles, ever to have graced the sport.

Leander Paes’ 8 Doubles Grand Slam Titles, coupled with his 10 Mixed Doubles ones, bear testament to the incredible authority that he commanded on the Tennis court. Leander Paes, now 48-years old, had announced that the 2020 season would be his last, and he would bow out of the sport as a professional player, at the end of the Tokyo Olympics. However, with the novel Coronavirus pandemic postponing the entire event by a year, Paes is still working hard to give his best at the event so that India finds a place forever in the record books.

This is what Paes had to say:

“I already have the record at seven and I’ve the motivation that if I can push that up to eight Olympics, my belief is that India forever will stay in the history books as the most number of Olympics played in Tennis. I’m hoping Tokyo comes around, the event happens.”

Paes first held the Tennis racquet at the tender age of five. Later in 1985, he joined a Tennis academy situated in Chennai, known as Madras at the time. He was the winner of the 1990 Wimbledon Junior Title and for a brief period held the top rank among all the players in the world. He joined the Indian Davis Cup team in 1990 and he went professional the following year. 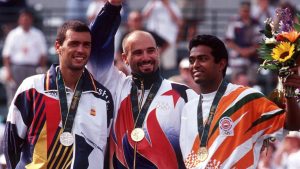 Despite him bursting onto the scene a few years before, Paes’ most iconic singles match would take place five years later on the 3rd of August 1996 at Atlanta. On this fateful day, a then relatively unknown Leander Paes would take on the legendary Andre Agassi, in the Men’s Singles Semi-finals of the Olympics. Paes, with a world ranking of 127 at the time, had come into the Olympics as a wild card and no one expected anything from him when he got pitted against Agassi in the semi-finals. Everyone expected it to be a simple pushover for Agassi, but a young 23-year-old Paes has other ideas. He gave Agassi a serious run and despite losing the tie, he managed to win the hearts of millions of viewers around the globe. His fearless demeanour and never-say-die left a mark on the ‘tennis great’ too. Agassi said after the match:

“In the semis I meet Leander Paes, from India. He’s a flying jumping bean, a bundle of hyperkinetic energy, with the tour’s quickest hands. Still, he’s never learned to hit a tennis ball. He hits off-speed, hacks, chips, lobs — he’s the Brad of Bombay. Then, behind all his junk, he flies to the net, covers so well that it seems to work. After an hour, you feel as if he hasn’t hit one ball cleanly — and yet he’s beating you soundly. Because I’m prepared, I stay patient, stay calm, and beat Paes 7-6, 6-3.”

“Agassi is one of the toughest competitors in the world of sport. But as the match progressed I did have my moments. Had I not injured myself , it might have been a different story. I had played my heart out and was only thinking that I had come too far to go back empty-handed”. 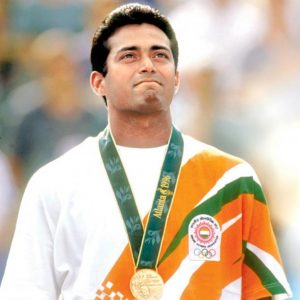 Leander Paes would go on to win the Bronze Medal match against Brazil’s Fernando Meligeni, 6-2, 6-4, after coming back from losing the first set 3-6. That was the first and only medal that India has won at the Olympics in Tennis, to this day. It was also an individual Olympic medal that India won after 44 years.

Leander said after his win:

“My match winning point came as Meligeni’s lob went marginally long… The stadium was packed with Indians, my wrist was throbbing in pain but all I could think of at that time was that I finally have the medal for which I had worked very, very hard all my life… As I was in a lot of pain, the celebrations that night was rather quiet. Dad took us out for a drink… and then the Indian community in Atlanta came together to host a dinner in my honour. They all wanted to see and touch the medal. It was something that belonged to every Indian.”

The winner of 18 majors, the incredible respect and love Paes has for his country is something to be really acclaimed and it is unquestionable that whenever the man has donned the nation’s colours he has given his blood, sweat and tears to ensure that India’s flag was always flying high.

“When it comes to the Olympics, regardless of which partner I play with, as long as India represents itself to get the world record of eighth appearance, I’m fine… Like I’ve done in the past, I’ve played with Mahesh, Rohan, Sania in the Olympics… Everything that I’ve done is for the flag, for our community.” 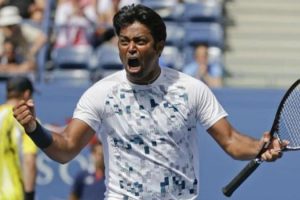 The fact that Paes has played some of his best Tennis while donning India’s jersey is clearly evident from his nearly impossible record at the Davis Cup. Paes ranks 5th on the list of all-time Davis Cup Winners, with 43 wins and 48 wins in Doubles and Singles, respectively, bringing his total tally of wins to 91. In his heydays, a top player at the Davis Cup would have to play 3 matches in as many days, with each tie over a five-set format. Paes however wasn’t one to shy away from a challenge, when it came to representing his nation. He has not only played 1424 matches but also has spent 29 years, the maximum number of years on tour, amongst his peers.

Leander Paes is a true Hero and is unfortunate that this incredibly illustrious career is going to soon come to an end. However, the man still makes us want to yearn for a bit more when he says,

“Age is just a number. The tennis ball does not know the age of a human being hitting the ball. It understands power, spin. It’s what we do matters.”

It will be a bittersweet moment when Paes finally hangs up his Tennis racquet in the near future, but one thing is for certain – he will always be a major reason for India’s popularity in the world of Lawn Tennis.

Previous As Eriksen collapsed, Football fraternity united, but the moment brought back memories of some heartbreaking incidents
Next Indian Cricket on 18th June: From Kapil Dev’s remarkable 175* to playing the final of the World Test Championship