The Chess Olympiad is scheduled to take place in India for the very first time from 28th July to 10th August 2022.

Indian Prime Minister Narendra Modi launched the torch relay of the Chess Olympiad in Chennai by declaring, “This is the first time that the country will host the Olympiad. We are proud that chess, which was invented in India, is leaving a mark across the globe”. 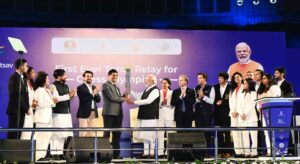 India became the first-ever country to have the Chess Olympiad Torch Relay as the International Chess Body, FIDE, has instituted this part of the Olympic tradition in Chess this year. FIDE President Arkady Dvorkovich handed over the torch to Narendra Modi, who in turn handed it over to Chess legend Vishwanathan Anand. He jogged a few yards to cheer the spectators who were present to witness the historic occasion.

“There are moments when you stand there and everything that you have done flashes past you. Today as I took the torch from Respected Shri Narendra Modi Ji. I looked at the Indian Chess Team. It was “THE MOMENT ” like no other,” tweeted Anand.

The torch will be taken from Indira Gandhi Stadium in New Delhi to 75 cities, including Srinagar, Jaipur, Surat, Mumbai, Bhopal, Patna, Kolkata and Gangtok in 40 days before ending its journey at Mahabalipuram. At every location, chess grandmasters of the state will receive the torch.

In order to respect India’s Chess tradition, this Torch Relay for the Chess Olympiad will always begin in India and travel across all continents before reaching the host country.