23-year-old Indian Boxer Lovlina Borgohain caused a huge upset in the quarter finals of the Women’s Welterweight category by beating former world champion, Nien-Chin from Chinese Taipei. Thus, she not only secured a berth in the semi-finals of the event at the 2020 Tokyo Olympics, but also assured the nation an Olympic medal.

Lovlina’s introduction to the world of Boxing was more of an accident than proper planning. She was spotted by Padum Boro, the SAI ((Shillong and Dimapur) coach. She fell in love with Boxing from very early stages of her introduction to the sport. She preferred it to kickboxing and kept on training hard. 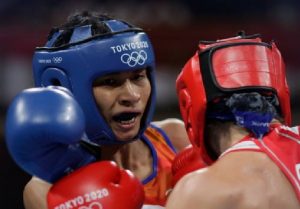 According to Padum Boro, “She seemed to have the talent and physique to make a good boxer. We merely guided her through. What stood out about her was her calm mind even at that time. She is also a very disciplined kid.”

It has been a long and arduous journey for the pugilist from Assam. Lovlina Borgohain was often made fun of in her school, in Baro Mukhia village in Golaghat district of Assam, because she was taller than her peers. She also had to endure a fierce backlash from society, since she is a female boxer.

Her preparation for Tokyo 2020 was hampered when last year, her mother, Mamoni Borgohain, had to undergo a kidney transplant. Lovlina had visited her at the time but, unfortunately, she tested positive for the novel Coronavirus, one day before she was scheduled to leave for Europe. The ‘Olympic-qualified’ squad was travelling to Europe, on a 52-day training trip. Lovlina tried hard to get back to match fitness as soon as possible. She received a lot of support from the government during her trying times, which included a training camp in Assam personalised for her, when she restarted her training post recovery from Covid-19. 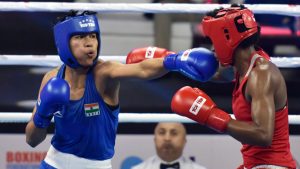 “People say boys carry the legacy, but I am proud to be the father of three daughters, they are no less than any boy. Lovlina stood with us like a rock. She is indeed the backbone of this family,” is what an emotional and proud Tiken Borgohain had to say.

Rather than watch his daughter fight it out at the Olympics, Tiken went out for a walk, even though almost the whole village had converged on the Borgohain residence. He returned only after he heard shrieks of joy, and people celebrating, while uttering Lovlina’s name. “I didn’t want to jinx her,” – that’s what he said about the incident later on.

Being a small-scale businessman, Tiken Borgohain, had to face multiple financial difficulties. He, however, ensured that Lovlina and her training never got too affected because of those. Lovlina has always had the good fortune of being born into a family who have always supported her through thick and thin. 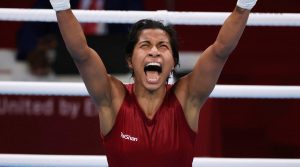 At the start of her Boxing career she had to move out of her home, to relocate to SAI hostels, for continuing her training. She had first gone to Guwahati and then she went to New Delhi. It was a tough phase for both her parents, and Lovlina herself. Today, she has become the third Indian pugilist to achieve this feat, after Vijender Singh (2008, Beijing) and MC Mary Kom (2012, London). Only time will tell what the colour of that medal will be. She goes up against Busenaz Sürmeneli(Turkey) in the semi-final, on her maiden Olympic campaign.