Tokyo Moment: Flora Duffy puts her name into the record books; makes Bermuda the smallest country to have an Olympic Gold Medal

33 years old Flora Duffy pulled off a stunning victory in 10km Run to give Bermuda its first-ever Olympic gold medal. Thanks to Duffy’s win, Bermuda became the smallest country to bag a gold medal at any edition of the summer Olympic Games.

The small island of Bermuda, located in the Atlantic has a population of just around 62000. The island territory which is particularly famous for its picturesque beaches, will now onward be also called the ‘Land of Flora Duffy’. The whole of Bermuda expected an Olympic gold from Flora Duffy and she had to bear that burden for five years. But as promised to her countrymen, the triathlete won a gold medal at the Olympic Games in Tokyo and gave Bermuda its first gold medal.

“I think the whole of Bermuda is going crazy, that’s what makes it so special.” 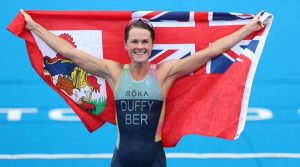 On the night before the race, the tropical storm of Nepartak tore through Tokyo, adding an extra element of difficulty to the Triathlon. The start of the race had to be pushed back by around 15 mins owing to high winds and heavy showers. There were also multiple bike crashes during the rain. But, Duffy, on her D-Day, put in a commanding performance and completed the race with 1hr 55min 36sec on the clock.  Unfortunately for Taylor-Brown, she had to combat a puncture in her rear tyre with around 2 km remaining in the 40km bike section, and had to settle for silver.

Flora Duffy is the only person to win three Triathlon World Titles in the same year in 2016, claiming the WTS, ITU Cross Triathlon and Xterra titles in close succession. In April 2018 Duffy won the gold medal in the Commonwealth Games held in Gold Coast and became Bermuda’s first female Commonwealth gold medalist. And now she is an Olympic champion. 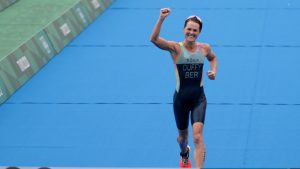 Born to parents who resided in England, Duffy could have easily opted to enroll herself in Team Great Britain due to her dual nationality. Despite the abundance of resources and money that she would have received if she had chosen Great Britain, Duffy still decided to choose Bermuda.

“I’m born and raised in Bermuda, that’s where my heart is. I have family in England and that’s special, but for me it was always Bermuda that felt the most special.”

A couple of years back Duffy was given the honour of OBE (Officer of the Most Excellent Order of the British Empire). Upon being asked that being referred to as ‘Dame Duffy’ might have a nice ring to it, she replied with a smile,