Oksana Chusovitina, the Uzbek athlete, received a legendary farewell in her eighth Olympic campaign, at the Tokyo 2020 Games, proving that camaraderie and respect in sport still prevail.

Oksana Chusovitina had an incredible career, with her first Olympic participation dating way back to 1992. She was the Soviet all-around champion at just 13-years old. In 1991, she became the world champion in Floor. She bagged the gold medal in the team event and silver medal in the Vault, at the 1992 Barcelona Games and the 2008 Beijing Games, respectively. 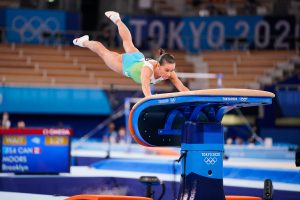 Her career is also an embodiment of the political upheaval that sent shockwaves through the entire Soviet Union. Having competed under the Soviet flag, she also represented the Commonwealth of Independent States (Unified Team), and later on her native Uzbekistan, when the Soviet collapsed.

She also competed for Germany, when she had relocated there, while trying to find treatment for her son’s leukemia. After that she returned to compete for Uzbekistan again.

For Oksana it’s her burning passion for Gymnastics that fuels her successful and very long career. She had announced her retirement at the 2012 edition of the Games, but soon went back on that decision 24 hours later.

“There is no secret. I just love Gymnastics and no one ever forced me to do it. I do it with pleasure.” 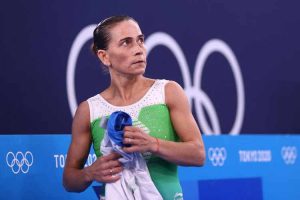 Beating all odds, Oksana Chusovitina, competed in Tokyo 2020, even at the age of 46. Unfortunately, she could not book a place in the Vault final and had to bid adieu, just a day after the opening day of the women’s competition. As her final campaign came to an end, an already emotional Oksana suddenly realised that she was receiving a huge ovation from all present there and could not hold her tears back any more. She is a true legend of the sport and brought glory to her country.

It is safe to say that since there were no fans present at the arena owing to the effects of the novel Coronavirus, Oksana was deprived of a resounding farewell from the thousands of fans who would have been present there otherwise.  Her fellow adversaries, however, did not let her feel the absence of spectators. Every coach and fellow or opponent gymnast took a moment to hail her exemplary career and came together to give her a standing ovation. It was a thoroughly beautiful and emotionally charged moment that is arguably the most heartwarming moment of the 2020 Tokyo Games. 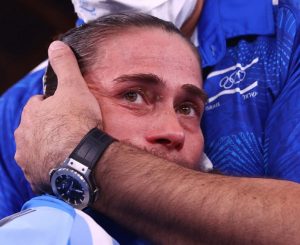 Oksana could not hold back her tears any longer, and could be seen wrapping her arms around her coach, in a tight hug.

“These were tears of joy because so many people were supporting me.”

Chusovitina’s determination and extreme adaptability allowed her to keep up with the changing times and had the global Gymnastics community in awe. She is an inspiration for many, as has proved time and again that age could never be a barrier if anyone sets his/her mind at accomplishing something.

Six-time Olympic medallist Aly Raisman, took to Twitterto describe Chusovitina,  “No words to describe how impressive that is. Forever an icon.”

Now that her career is at a close, Oksana Chusovitina said that she was really eager to devote more of her time to her family. She really wants to set up a sports club in Tashkent, the Uzbekistan capital.