Patiala-born discus thrower Kamalpreet Kaur achieved automatic qualification to the finals of the Women’s Discus Throw at Tokyo 2020 after she achieved a second-place finish with a 64.00m effort.

The COVID-19 pandemic took a heavy toll on Kamalpreet Singh. She experienced depression due to being idle at home. She had no competitions to prepare for the Olympics and at a point she started playing Cricket in her village to fight depression. But she came back strongly and prepared herself for the Games. Today at the Olympic Stadium, Kamalpreet Kaur became one of only two throwers from the 31-women field who managed to breach the 64.00m mark in the qualifying round. 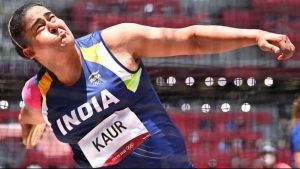 No Indian athlete has ever won an Olympic medal in Athletics. So, all of India’s hopes will be pinned on 25-year-old Kaur, when she battles it out in the finals on August 2. This is, incidentally, Kaur’s maiden Olympic campaign.  She is the first Indian woman to make a throw beyond the 65.00m mark, and also holds the Indian record (65.06m), which she set at the Federation Cup.

Kamalpreet Kaur started off with a 60.29 m opening throw. She backed it up with a strong 63.97 m attempt. However, she made a great 64.00m throw, which confirmed her a spot in the finals, with 64.00m being the direct qualification mark for the event finals. 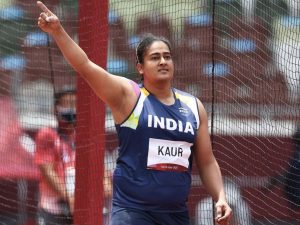 12 throwers, in total, achieved qualification for the final. Since just two of them managed to breach the direct qualification mark, the remaining 10 athletes were decided based on their best attempts on Saturday. Unfortunately, India’s 4-time Olympian Seema Punia made an exit from the event after finishing 16th in the qualifiers, with her best attempt of 60.57m.

Valarie Allman of the United States took first place in the qualifying round with her best attempt of 66.42m. She is arguably the favourite to win the event in the finals. 2-time Olympic champion, Sandra Perkovic of Croatia, stood third with her 63.75m throw.

After her confident and commanding performance in the qualifiers, it would not be too farfetched to say that a repeat of that performance, will make Kamalpreet Kaur a strong contender for an Olympic medal.