The Indian Women’s Cricket team, that is ready to take the flight to England, includes rookie wicketkeeper-batter Indrani Roy from Jharkhand who prepares herself for her maiden Test and ODI call-up in the national team.

The Indian Women’s Cricket Team put on a dismal performance when they welcomed the South African Women’s team back in March 2021. The latter won 4 of the 5 ODI matches, and 2 of the 3 T20 internationals, that were played between the two teams. However, brushing that bad outing aside, the Indian Women’s team is now getting ready to travel abroad for their upcoming Tour of England, scheduled to be underway from 16th June, 2021.

The highly-anticipated tour is going to consist of a single Test match, along with a treble each, of ODIs and T20 Internationals. The Board of Control for Cricket in India (BCCI) women’s selection committee, led by former left-arm spinner Neetu David, recently announced the India women’s squads that will lock horns with their English compatriots. 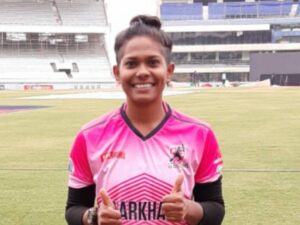 Alongside all the regulars in the team, like Mithali Raj (captain for Test and ODIs), Harmanpreet Kaur (captain for T20Is), etc., there has been a pleasantly surprising addition to the team that has certainly triggered a lot of excitement amongst Women’s Cricket fans. Rookie wicketkeeper and batter, Indrani Roy, who plays for Jharkhand, earned her maiden India call-up. She has been included in the squads for all three formats on the back of her stellar performances at the recently concluded Senior Women’s One-Day Tournament, where she accumulated a mammoth 456 runs in 8 matches and unsurprisingly becoming the leading run-scorer for the tournament.

The West Bengal-born starlet started playing Cricket at the age of 15, while in the eighth standard. But, soon after, her cricketing career almost came to a screeching halt even before it actually took off. As she started securing lower grades in school, Roy’s father forbade her from playing Cricket anymore.

Despite having to stop playing at the time, she was not ready to give up on her hopes so easily. She kept on searching for places where girls were offered Cricket coaching and finally found one. Under the guidance of coach Pachu Gopal Majhi, who convinced young Roy’s father to let her play, Indrani’s Cricket career actually took off while she was in the 10th standard. 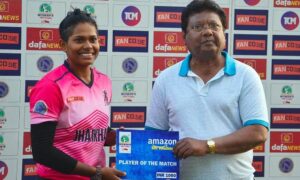 Born at Liluah in Howrah district of West Bengal on 5th September 1997, Indrani Roy started playing for Bengal, after being selected for the U-19 Bengal team in 2014. Incidentally, her first stint with the Bengal team was a successful one, with the sate finishing as the champions that year. But after playing for Bengal till 2017, Indrani decided to shift to Jharkhand in search of greener pastures. That was perhaps the right move that the youngster made to prosper in Women’s Cricket. She became a regular player in the Jharkhand State team.

Indrani was at one of the training sesions with the Jharkhand team in Ranchi (2020), when she met Mahendra Singh Dhoni. A massive ‘Mahi-Fan’, the smart custodian wasted no time in asking for a few pointers from one of the greatest to ever grace the sport. The most successful captain of India did not disappoint her one bit. He explained how important it is for wicket-keepers to always improve on their movement and reflexes within the 5-meter radius and advised her to perfect this key point. According to the youngster, learning tricks from a maestro like Dhoni is nothing short of a privilege. She admits that his tips have already affected her game for the better and she always keeps them in mind, whenever she walks out onto the pitch.

Roy was a part of the India Blue team in 2018, and in 2019, she played for India C. Her stints with the bat may not have been very memorable, but she enjoyed a good time behind the sticks. Her most memorable achievement, which arguably is the main reason behind her maiden India call-up, is her brilliant run-scoring form in the Senior Women’s One-Day Tournament. There are 2 unbeaten centuries in her huge tournament tally of 456 runs in 8 matches. 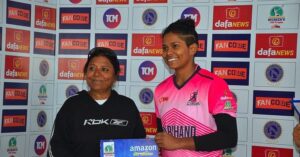 Her sheer determination was on full show against Chattisgarh when Jharkhand, having lost one game already, needed to chase down 175 runs in only 31 overs to qualify for the knockouts. The swashbuckling 23-year old hit an unbeaten ton, to steer her team to victory within the reduced overs and secure qualification. These stellar performances make it evident why she has booked a place within the Indian squad and as for Roy, she is just happy that all her hard work has finally paid off. According to her, she just wants to learn from her seniors and give her all for the country, if she gets a chance.

In all probability, Taniya Bhatia will be wearing the gloves for the Test Match against England. However, there is still hope for the free-scoring Roy, as she might get a spot in the playing XI, in one of the limited-overs matches. Indrani Roy will definitely be on the lookout to make a mark in her first tour with the Indian team but alongside she does not want to miss the opportunity of learning the best from her seniors.

Previous To happen or not happen- the question looms large on Tokyo Olympics
Next As PGA Championship 2021 opens at Kiawah Island, a look back to the fond memories it has given to Indian Golf