The Olympic Games – the single greatest sporting spectacle in the world. It is the dream of arguably all athletes to get featured in the Olympics, and if possible, win a medal for their country. Unfortunately, there is serious turmoil surrounding the Tokyo Olympic Games owing to the effects of the novel Coronavirus.

The Covid-19 pandemic has already seen the Summer Olympic Games being postponed from 2020 to 2021. The Tokyo Olympics have now been scheduled to begin on July 23 and then continue till August 8. However, with Japan declaring the third state of emergency for Tokyo, along with three of the country’s western prefectures (Hyogo, Kyoto, and Osaka), the Summer Olympics seriously seem to be on the line, this time around.

Japan has already notched up over 618,000 Covid-19 cases, which include more than 10,500 deaths since the pandemic first reared its ugly head. Though the numbers may not seem extremely disastrous in comparison to several other countries that have much worse numbers, it is the recent surge that has put a huge question mark on the viability of hosting this behemoth of a sporting event, at such a risky time. In the past few days, Osaka and Tokyo together have recorded around 1800 new cases, in one day. This dire situation is clearly illustrated by the fact that once in the past week, at an Osaka Nursing Home, 61 residents got infected, and 14 lost their lives in the queue, simply waiting to get admitted. 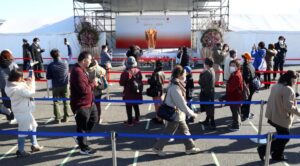 The effects of this incredible spike can already be seen on the Tokyo Olympics torch relay. The relay that began on March 25 in the northeastern part of Japan, is supposed to continue till the opening ceremony of the Games, on July 23. Almost 10,000 participants were supposed to be a part of this relay. But the officials have also had to pull the relay off the streets of Hiroshima, after they had already made five separate alterations to the relay, owing to the recent upsurge in new Covid-19 cases.

Several relay participants are also having second thoughts as the situation progressively gets worse. Six people, who assisted with the torch relay have already been diagnosed with the virus, increasing the total number of cases involved in the Games, to eight and multiple celebrities who were supposed to take part in the relay have also withdrawn, due to safety concerns. 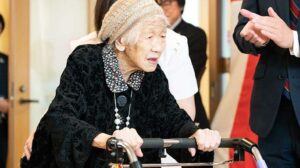 Kane Tanaka – the oldest person on the planet. Tanaka, who has her name recorded in the Guinness Book of World Records, was one of the participants for the part of the relay, scheduled to be held in Fukuoka, Japan.

The two nations of Canada and North Korea have already pulled out of the event. Kei Nishikori, the only Japanese player to be ranked in the top 5 in Men’s Singles(in the Open Era), and Naomi Osaka, presently ranked second in Women’s Singles, have both expressed deep concerns over the Olympics being held during such trying times. Asked about the Games, Osaka replied, “Of course I would say I want the Olympics to happen because I’m an athlete and that’s sort of what I’ve been waiting for my entire life. But I think a lot of unexpected things have happened and if it’s putting people at risk, and if it’s making people very uncomfortable, then it definitely should be a discussion.”

The results of a public opinion survey, conducted by Yomiuri Shimbun Daily (7-9 May) showed that an astounding 59 percent were in favour of the Olympic Games being completely scrapped. TBS News conducted a separate poll which found that 65 percent of the people who participated in the poll were in the favour of the Games being cancelled outright, or postponed once again. 37 percent of that 65, wanted complete termination of the Games. 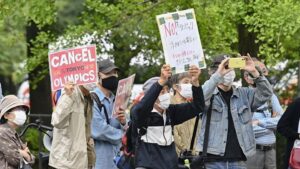 Around a century of Japanese civilians held a march around Tokyo’s National Stadium, to mark their Anti-Olympic protest, as a ‘test event’ for the Olympics was being held inside. They vented their frustration towards the organizers in Tokyo along with the International Olympic Committee(IOC) for continuing with the Games, despite the sharp increase in Covid-19 cases. The stance of the general public about the Olympic Games being held, became crystal clear when an online petition calling for the cancellation of the Olympics recorded more than 300,000 signatures, in roughly the first 5 days, since its launch.

Despite large parts of the Japanese population staunchly against the Games being held at this time, top Olympic official and the vice-president of the IOC John Coates has been adamant that the Games will commence as planned. He has expressed that even though the increasingly negative Japanese sentiment towards the Tokyo Olympics, “was a concern”, there was no scenario that would prevent the sporting extravaganza from going ahead as planned, despite Covid-19 concerns.

Replying to the AFP’s question, whether there was any event because of which the Games might be postponed or canceled, Coates replied, “No, there’s not. The Diving World Cup featuring more than 200 athletes from 50 countries, a half-marathon, and others, are already being held as test events for the Olympics.

IOC officials and Tokyo Planners have all insisted that the spectacle, worth around $15.4bn, will progress as planned, in “a safe and secure” way. The Planners came up with a long list of rules to prevent the spread of the virus, one of the most important which is that overseas spectators have been entirely banned from the Games. US pharmaceutical giant Pfizer Inc, along with German partner BioNTech SE has announced that doses of their Covid-19 vaccine will be donated for the inoculation of athletes and other Olympic delegation members.

However Prime Minister Yoshihide Suga, when asked whether the Olympics would commence despite coronavirus cases continuing to spike, replied: “I’ve never put Olympics first.” Suga reiterated that the IOC always took the final call on the fate of the Olympics and the only role of the government was to take necessary measures to organize the event safely and securely. A TBS survey showed that the Japanese Prime Minister’s public approval rate percentage was dwindling at 40 percent, scarily close to the record lows that were recorded earlier in the year.

Japan has fallen behind the majority of wealthy countries when it comes to its vaccination campaign. A Reuter’s tracker has revealed that only a mere 2.6% of the nation’s population has been inoculated, and reports are coming out that state civilians are facing multiple difficulties to book shots. This coupled with the rapid transmission of the virus in the country, makes Japan hosting the Olympic Games at this time a tricky situation. Unfortunately for all Japanese nationals, they have to accept the decision of the IOC and the government of moving forward with the Olympics, whether they support it or not. The future will tell us the gravity of this decision and hopefully, human life is not its casualty.