Two-time Olympic winning legend of India Keshav Datt, passed away due to age-related issues. The formidable centre halfback breathed his last, aged 95 at his own residence in Kolkata. With his death, India lost the last remaining member of the legendary Olympic-winning team of 1948.

Hockey India President Gyanendro Ningombam issued a statement saying, “We are all very saddened to hear about the legendary halfback Keshav Datt’s demise early this morning….We all grew up listening to incredible stories of their memorable outings for independent India at the Olympics and they went on to inspire generations of hockey players in the country.” 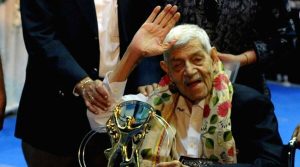 Born on the 29th of December, 1925, in Lahore, Kesav Datt was a student of the famous Government College in Lahore, which was home to several other Olympians including Syed Jaffar, Commander Nandy Singh and Munir Dar. He migrated to India once partition took place and tried his trade firstly in Bombay, before finally settling in Bengal.  He had represented Punjab (in undivided India), then Bombay, and finally Bengal in the National championship.

Kesav Datt’s talent was there to see for everyone from a very early age and he was always willing to work. His incredible prowess over the sport is clear from the fact that by the considerably young age of 26, he was already the winner of 2 coveted Olympic Gold Medals (1948 & 1952). Datt was also a member of the Indian Hockey Squad that toured East Africa back in 1947, captained by the Hockey Maestro Dhyan Chand. An admirer of Datt, Dhyan Chand in his autobiography titled, “Goal”, rated Datt as one of the finest halfbacks of the time.

Datt had already shown his class at the 1948 London Olympics, but it was his string of magnificent performances at the 1952 Helsinki Olympic Games that truly earned him a place in the Hall of Legends of Hockey players ever produced by India. According to Gurubux Singh, the member of the Olympic gold medal winning team in 1964 Olympics, “He was one of the greats who I always looked up to as an inspiration. His legacy will always be remembered as someone who played the game with a big heart and was a true patriot in every sense of the term.”

There have been several claims over time that Datt could not participate in what would have been his third Olympics at Melbourne in 1956, owing to ‘professional commitments with Brooke Bond’. Brooke Bonds was the firm Datt was employed at, at the time and in those days he could not afford losing his job.

Kesav Datt and the City of Joy

Back in 1948, Datt was already playing in the National Championship of Hockey held in Bombay, when his hometown in Pakistan, Lahore, experienced a massive, bloody, post-independent riot. Two years later he moved to Calcutta and fell so much in love with the city that he made it his home and never left after that. Such was his love for the city, that he even refused to leave when his wife and children moved abroad. 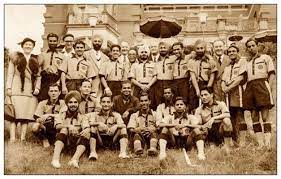 During his initial days in the city, Kesav Datt played for Calcutta Port Commissioners. Watching him play, Jahar Ganguly, famous Bengali actor and the then Mohun Bagan secretary, was completely bowled over by his talent. In order to respect the wishes of Ganguly, Kesav Datt donned the colours of Mohun Bagan in 1951 and kept on playing for them till 1960. He was also the captain of the Mohun Bagan Hockey squad first from 1951-1953 and then reclaimed the mantle in 1957-1958.

An extremely charismatic personality, Datt used to arrive for matches on the back of a Harley-Davidson motorcycle. He commanded such an immense fan following that even rival teams’ supporters would fill up the stands just to watch the ‘Master’ in play. In a span of 10 years, Mohun Bagan lifted the Beighton Cup thrice and the Calcutta Hockey League Title six times, with Datt in their ranks. On the Mohun Bagan website it reads, “In 1952, Mohun Bagan achieved the first double in Hockey when it lifted the Beighton Cup for the first time along with the Calcutta Hockey League (CHL)”. 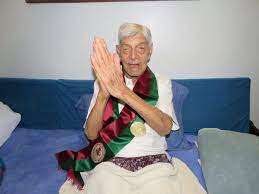 Kesav Datt went on to become the only non-footballing recipient of the Mohun Bagan Ratna Award in 2019.  He was bestowed with the Banglar Gourav by the West Bengal Government in the year 2013, and later on became a recipient of the Dhyan Chand Lifetime Achievement Award, given by Hockey Bengal, in 2020.

Kesav Datt was a true patriot with a huge heart. He donated his 1948 medal to Jawaharlal Nehru after the conclusion of the 1962 Indo-China war. The second gold medal remains with his son Arun.

Even though he may be remembered as one of the greatest players to ever grace the sport of Hockey, Kesav Datt was a man of many layers and talents. Unbeknownst to many, he had also been an accomplished and respected Badminton Player and he held the No. 1 ranking in Bengal during his time. Undoubtedly Indian Hockey has lost one of its greatest advocates of all time. All we can do is revisit his skills and cherish the evergreen enigma of Keshav Chandra Datt.