UPDATES
Home / EXCLUSIVES / BEYOND THE LIMITS / Olympic Refugee Team: The symbol of hope and peace for all refugees across the world

Olympic Refugee Team: The symbol of hope and peace for all refugees across the world

The Olympic Refugee Team will participate in the Tokyo Olympics 2020 as a symbol of hope for every refugee around the planet.

Over the past ten years the refugee population around the world has increased by more than two times. The number of people who have been forcibly displaced all over the planet continues to rise at an alarming rate. Along with official refugees, the number of people for which UNCHR- the UN Refugee Agency- is much concerned about has risen from 36.4 million in 2009 to 86.5 million in 2020. [Source: Concern Worldwide US]

With the world facing a major refugee crisis, the challenge lies on how the ‘displaced ones’ can be successfully integrated into mainstream communities. Social ‘inclusion’ of these people is the need and sport is the one of the most effective tools to promote human right and integration among the refugees.

Inception of the Olympic Refugee Team 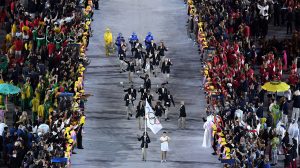 In October 2015, Thomas Bach, the President of International Olympic Committee (IOC) announced the creation of the Refugee Olympic Team. It was the first-ever of its kind and allowed the athletes to participate at the Rio Olympic Games in 2016. After 10 months of that announcement, 10 athletes, who originally hailed from the 4 countries of South Sudan, Ethiopia, the Democratic Republic of Congo and Syria found themselves competing alongside 11,000 other athletes at the Olympic Games in Rio. It was a message of hope and ‘inclusion’ to the millions of refugees across the globe; it inspired the world with the power of their human spirit.

“This will be a symbol of hope for all refugees in the world, and will make the world better aware of the magnitude of this crisis. It is also a signal to the international community that refugees are our fellow human beings and are enrichment to society”– Thomas Bach. [Source: Olympics.com]

Thanks to this unique project, the IOC was able to demonstrate their commitment to support refugees through sport. It was also important since it showed how Olympic Solidarity, using the Refugee Athlete Support Programme, assists refugee athletes to not only train with the goal of qualifying for the Olympics, but also continue their sporting careers.

The IOC tasked the National Olympic Committees (NOCs) to identify all refugee athletes who possessed the potential to qualify for the 2016 Rio Olympic Games. IOC also announced that those athletes would be funded by Olympic Solidarity to aid both their preparations, as well as the qualification efforts.

From initial 43 candidates, 10 were chosen to be a part of the first-ever Refugee Olympic Team. Their sporting levels, official refugee status (UN verified), and even their personal situation and background were all part of their nomination criteria. After crossing all these hurdles, the 10 took part in the 2016 Rio Olympic Games and competed under the Olympic Flag.

The Olympic Refugee Team of 2016 had Olympian and former Marathon world record-holder Tegla Loroupe of Kenya and Isabela Mazão from Brazil as its Chef de Mission and Deputy Chef de Mission, respectively.

Back in October 2018, with two years left for the start of the Tokyo 2020 Olympics, the IOC announced that the Tokyo edition of the Olympics would have a Refugee Olympic Team. Olympic Solidarity was entrusted with the task of formulating the conditions for participation, along with deciding the definition of the selection and identification process for a Refugee Olympic Team for Tokyo 2020.

Once the Tokyo 2020 Olympic Games were postponed, the athletes making up the IOC Refugee Olympic Team for Tokyo 2020 were announced in the month of June 2021. 25 of the original 56, hailing from 11 countries, living and training in 13 host countries, were selected to be a member of this editon’s Olympic Refugee Team in the Tokyo 2020 Olympic Games. In the end 4 more athletes from the International Judo Federation Refugee Project, were selected to complete the Mixed Judo team, thus raising the total number of members of the Olympic Refugee Team to 29.

EOR is the official acronym of the Refugee Olympic Team and it stands for the French name – “équipe olympique des réfugiés“. At the starting ceremony of the 2020 Tokyo Olympics they will march in the second position, behind Greece, holding aloft the Olympic flag. For the second time, Tegla Loroupe will be the Chef de Mission of the team. However, the mantle of the Deputy Chef de Mission will be taken up by Olivier Niamkey of IOC and Stephen Pattison of UNHCR, Geneva.

Previous Siddhi Kapoor- the young golfer who finds passion, vocation, profession and mission in Golf
Next Inclusion in Olympics- The ‘refugees’ who stand for world peace and harmony