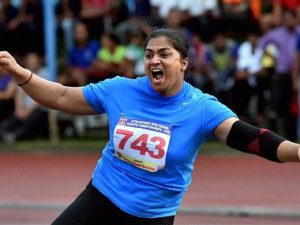 Birthday girl Manpreet upstaged defending champion Guo Tianquin of China to win gold with a career second-best throw of 18.28m.  The winner of Asian Championships will get automatic berth for the World Championships in London in August, but Manpreet has already qualified for the event with her own national record-improving effort of 18.86 in China.

Govind Lashmanan became the surprise winner in 5000m when he won the gold in 14 minutes and 54.48 seconds. He won bronze in the previous edition of Asian Championships.

But discuss thrower Vikas Gowda disappointed as he failed to defend his title and settled for a bronze with a best effort of 60.81m. Gowda’s participation was under controversy as he was called by the Athletics Federation of India to appear for  trial to test his fitness.