UPDATES
Home / TRENDING / LATEST / ‘Inheritance of athletic ability’: An overview on the influence of genetic background in sports performance

‘Inheritance of athletic ability’: An overview on the influence of genetic background in sports performance

Athletic ability depends on certain factors like strength and composition of skeletal muscles, body morphology, aerobic endurance, flexibility, cognitive development and injury susceptibility. These factors are largely associated with an individual’s genotype and its background. But how far genetic background can become a contributing factor in sports excellence?

Genes involved in the function of skeletal muscles, communication between nerve cells and the production of energy for the cells are known to be associated with inheritance of certain athletic traits. This is because the genetic information is passed from parents to offsprings via genes. These genes are present in the chromosome and each cell nucleus contains 46 chromosomes, 23 inherited from each parent.

The genetic influence on anthropometric dimensions such as height is completely expressed at full maturity. But sometimes an individual’s sedentary behaviour leads to insufficient development of internal structures even at full maturity which are far from their genetic capacity. There is a considerable inbuilt capacity in reserve that does not get tapped due to their behaviour.

The right kind of training induces internal structures like muscles to increase in size and strength by turning on genes to produce the necessary proteins required for the improvement of internal structures. Thus there is a change in morphology and physiology of a person that is clearly an example of phenotypic plasticity response.

Since sports performance can be considered a polygenic trait, i.e whose phenotype is influenced by more than one gene, genetics can provide very useful insights into it. Describing the influence of genetics is very challenging since the physical requirements are unique to each sport and the athlete’s capability to excel in one discipline of sport differs from the other.

Now a very intriguing question might come to our mind, “Is there really a single sport gene?” Well, the idea that a single gene could enhance sports performance is inconclusive and misleading. The scientists are now focussing on exploring combinations of genetic endowments which impact athleticism. 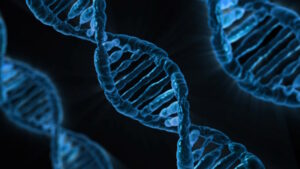 Advances in biotechnology have led to the identification of more than 200 different variations linked to athletic phenotype. It is likely that several genes are responsible for variation in training responses and sports performance, each of which makes only a marginal contribution to the individual’s athletic ability.

A variation in the ACE gene, known as the ACE I/D polymorphism was the first genetic factor to be associated with athletic performance. Individuals with DD pattern of allele of this gene are related to a higher proportion of fast-twitch muscle fibres and greater speed while II pattern of allele corresponds to endurance athletes.

The ACTN3 gene codes for the α-actinin-3 protein are found particularly in the fast twitch muscle fibres used during explosive activities. A variation leads to a premature stop codon (X) instead of an arginine (R) at position 577. The RR genotype is observed in elite power athletes while the XX genotype is associated with lower sprinting ability and lesser muscle strength. Other genes involved in the function of skeletal muscles, communication between nerve cells and the production of energy for the cells are also associated with athletic performance.

Though exploring the relationship between genetics and sports performance is beneficial, gene doping is an upcoming threat. The increasing popularity of gene therapy is accompanied by the risk of it being abused in the field of sports. World Anti-Doping Agency (WADA) defines gene doping as ‘the non-therapeutic use of genes, genetic elements and/or cells that have the capacity to enhance athletic performance’. Transfecting genes which improve aerobic performance and enhance muscular output are considered attractive alternatives to the traditional performance-enhancing drugs. Gene doping demeans the integrity of sports and can also lead to dangerous health consequences. Here ethical concerns should be emphasized to ensure that the spirit of sportsmanship is maintained.

Genetic Background Is Not The Only Contributing Factor

A very important point to keep in mind is that genetic background is only one of the multiple contributing factors to sports excellence. Environmental, psychological and sociological factors also highly influence sports performance. A favourable genetic profile might be advantageous but without proper training, it cannot guarantee high-level sports performance. Therefore, to achieve elite athletic performance, genetically driven physical and mental attributes in optimal combination along with an ideal environment is required.

Previous As Sunit follows uncle SSP’s footsteps, the Chowrasia love affair with Indian Golf continues
Next ‘The Fan Matter’- a stark contrast between European and Indian Football in terms of importance given to a club’s fanbase