India, the defending champions and the host suffered a loss at the magnificent Kalinga Stadium in Bhubaneswar. 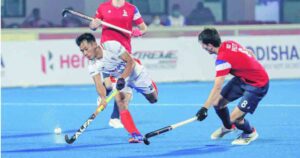 This was the opening match for both India and France. India scored a couple of quick goals in the last few minutes of the encounter, but they were too little too late. France, who hold a global ranking of 26, stunned World Number 5 India, and held on to their 1-goal lead till the end, to win 5-4.

Vivek Sagar Prasad was captain of the young Indian side. As for France, their captain Timothee Clement, put in a scintillating performance. He scored a hat-trick which gave France a 5-2 lead in the third quarter. That 3-goal lead for France proved to be too much to recover from, for India.

India were the champions of the 2016 edition of the Junior World Cup, after a long wait of 14 years. However, the upward trajectory of Indian hockey since then, along with the fact that some important teams like England, Australia, and New Zealand, have pulled out of the tournament, turned India into one of the tournament favourites. India may have been shocked by the underdogs, in their opening fixture, but it is safe to assume that they will be itching to bounce back to winning ways from their next fixture. India take on Canada in their upcoming fixture, to be held on November 25th, 2021, at 7.30pm (IST).