The Indian Hokey team will be one of the favourites to win the FIH Junior Hockey World Cup 2021.

India, the defending champion, will play their first match against France in the Junior Hockey World Cup at Kalinga Stadium in Bhubaneshwar. They are only the second team after Germany to win multiple titles. 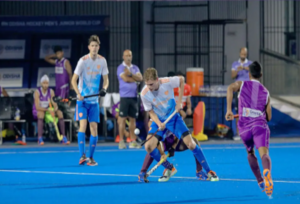 The teams are divided into four groups with four teams each. They will each play three pool matches, with the top two from each pool progressing to the quarter-finals. The first and second-placed teams from Pool A and Pool B will face each other in the last eight, with the same format followed for Pool C and Pool D. The third and fourth teams from each pool will play each other for classification.

India is placed in Pool B alongside Canada, France and Poland. The team is led by Vivek Sagar Prasad – a bronze medal winner with the senior team at Tokyo 2020 and a two-time ‘FIH Young Player of the Year’. Owing to the pandemic, the juniors have not competed in any overseas tour prior to the World Cup. Preparation took a further blow after dengue hit badly at the SAI Bangalore campus where the junior team was training.

However, the members of the team have been together for the better part of two years. Both the junior and senior men were housed in the same campus in SAI. So, they played a lot of internal matches against one another to practice before the tournament.

The primary purpose of the Junior Hockey World Cup is to find out the next generation of players for the national team. Of the 2016 Indian World Cup-winning squad, 8 members went to be a part of the Olympic bronze winning team four years later.

Previous Racial Abuse: Lilian Thuram believes that the white players remaining neutral is not an option for things to advance
Next Junior Hockey World Cup: Defending champion India handed a shock defeat at the hands of France