Manuel Santana won four Grand Slam singles titles and reached No. 1 in the world in 1965.

Manuel Santana, born to Braulio, an electrician, and Mercedes, a housewife, first saw Tennis when he used to  bring meal to his brother, who worked in a Tennis club in Madrid. He was immediately charmed by the sport and started as a ball boy in that club. As time passed he gradually picked up the sport and began his career in Tennis. 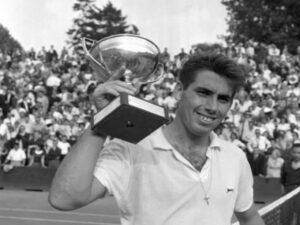 Manuel Santana’s first Grand Slam title came in 1961, the feat he repeated in 1964. In 1965, he won the US Open and led Spain to unexpected victory over the U.S. in the Davis Cup. He also managed to earn the number one spot in the same year. But Santana was magical in 1965 Wimbledon Championship when he won the title by defeating 6th seed Dennis Ralston.

His last big tournament win was in 1970 in Barcelona where he defeated Rod Laver. The year 1984 saw him being inducted into the International Tennis Hall of Fame. Speaking on Santana’s behalf at the induction ceremony, the former Tennis great Gene Scott said, “It’s difficult for a genius to be rewarded in tennis, and Manolo was one of those few who could. He literally invented one of the strokes that we now see in profusion — the backhand topspin lob.”

The pioneer in Tennis and great inspiration for Spanish sport as a whole, Manuel Santana passed away on 11th December 2021, aged 83. The news came in an announcement from the Mutua Madrid Open, the tournament where he was Honorary President and which he directed from 2002 to 2018. 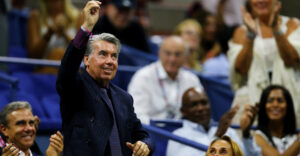 As news of the Spanish trailblazer’s demise spread, condolences poured in from all across the globe, especially on social media. Rafael Nadal posted in Spanish that “we will all miss you Manolo.” Nadal further wrote, “You will always be one of a kind and special. As I have said many times in the past: a thousand thanks for what you did for our country and for opening the way for others. You were always my role model, a friend and someone who was close to all of us.”

Nadal’s sentiments were also echoed by the Spanish King and Prime Minister, who dubbed Santana a “legend.”

Spanish King Felipe VI wrote on Twitter, “There are people who become legends and make a country great. Manolo Santana was and will always be one of them”.

On the other hand, Spanish Prime Minister Pedro Sanchez was quoted as saying, “He won Roland Garros, the U.S. Open and Wimbledon, a total of 72 tournaments and an Olympic gold to make him a tennis legend and one of the best athletes our country has seen.”

For Billie Jean King, winning her first Wimbledon title alongside Santana’s triumph there, back in 1966, is a fond memory. She wrote, “He & I won our 1st Wimbledon singles titles in 1966 (he was the first Spanish man to win the title). We danced the 1st dance at the Ball. He loved the sport, & we shared many conversations over the years.”