Young ‘Dueballer’ Barkha cannot keep calm when Dueball is on

Dueball, India’s indigenous game is spreading like wildfire and attracting athletes from all forms of sport. A resident from Delhi, Barkha is one such athlete who has completely fallen in love with the sport.

Barkha originally hails from Haryana, however she is currently staying in Delhi. She completed her graduation in B.P.E from the Koradi College in Nagpur. She also has a lot of experience as a sports teacher. Simultaneously, Barkha has already garnered a lot of experience in Dueball. She is proud of her knowledge of Dueball and believes that there will come a time when the majority of the population will start watching and learning more about Dueball. 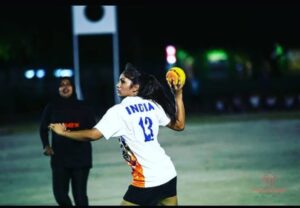 Barkha’s main aim in life is reaching the national level as a Dueball player. The first time she played Dueball was four years back, in 2017. Since then the ‘Dueballer‘ who loves to travel, has competed in 4 tournaments. Her biggest achievement in the sport, till date, is arguably securing the Best Player Trophy in the Senior National Tournament.

Barkha finds Dueball to be a sport which is new and engaging. Also, she says that the rules governing the sport, make it more interesting than other sports and it is very effective in building proper fitness, stamina, and skilled hand-eye coordination. In Barkha’s opinion Dueball is primarily based on Handball and has adopted a few rules from Basketball, Hockey and Football as well. 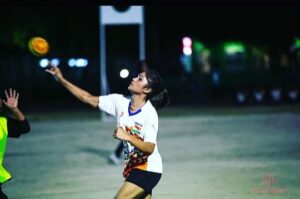 Barkha has been a Handball player, however, she finds Dueball still to be unique and that helps in the all-round development of a human being. When asked about possible areas of improvements in Dueball, she replied, “It needs the support of the government and the society, to reach the levels of Handball, Football, etc.”

Barkha hopes that by the end of the next decade Dueball will become as popular as Cricket. The extreme excitement of the young female athlete regarding Dueball, can be summed up by the one sentence she said before signing off, “I cannot keep calm when Dueball is on.”

Previous “I just kind of gave up after the tragedy, but my parents would not have liked it….,” Jeev Milkha Singh
Next Manuel Santana- the sporting legend recognised as the Tennis Trailblazer from Spain