UPDATES
Home / EXCLUSIVES / One of the greatest finishers of Football, Jimmy Greaves laughed and lived aplenty

One of the greatest finishers of Football, Jimmy Greaves laughed and lived aplenty

James Peter Greaves, one of the greatest England and Tottenham striker passed away in the early hours of 19th September 2021. Jimmy Greaves, as he was better known, was 81.

Jimmy Greaves, who netted 44 times in 57 appearances for England, had an incredible strike rate and scored a record 356 goals in England’s top flight. The record still stands. Greaves started out with Chelsea, at the the beginning of his career. He amassed a huge 41 goals in the First Division in 1960-61. It is still the maximum number of league goals scored by a Chelsea player, in a single season. This was followed by a brief spell at AC Milan. Greaves turned out in Milan’s colours a total of 14 times, and scored 9 goals within that time. Finally, he returned to England Football and joined Tottenham Hotspurs. He would later go on to play for West Ham as well, before he retired from the sport. 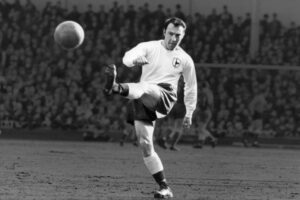 It was for Tottenham that Jimmy Greaves scored 266 goals in 379 appearances, from 1961 to 1970. He still remains Spurs’ highest scorer till date. His 37 league goals in the 196-63 season is also the best record for a Spurs player, in a single season. Greaves also has the unique distinction of being a player who has scored on debut, for each team he has ever played for. Despite having turned out for other teams, Spurs fans tend to lay claim over Greaves.

Greaves used to run in an exceptional carefree manner and often passed the ball past the goalkeeper and put it into the nets. It was often said that during his time no one was better than him for putting the ball inside the goal with smoothness and poise. But at the same time, he had strength and pace that enabled him to clear the defenders. 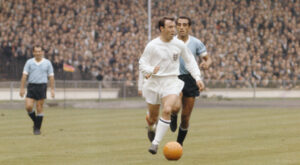 Greaves made his debut for England in May 1959 against Peru, scoring his side’s only goal in a 4–1 defeat. Greaves regularly found the net in subsequent matches, including a hat-trick in England’s 9-3 win over Scotland at Wembley in April 1961. In the 1966 World Cup, Greaves played all three group matches against Uruguay, Mexico and France. But in the match against France he was seriously injured and required 14 stitches. He was replaced by Geoff Hurst in the quarter finals against Argentina who remained in the playing eleven till the final as coach Alf Ramsey decided to keep his winning line-up.

It was the custom at that time that only the 11 players on the ground at the final whistle were awarded medals in the World Cup. So, Jimmy Greaves missed out on winning a World Cup medal in spite of being one of the greatest forwards of his time. However, 43 years later, in 2009, the rest of the players and backroom staff were honoured by British Prime Minister Gordon Brown at Downing Street where they were presented with medals. Greaves’s medal was sold at auction in 2014 for £44,000.

After his retirement from Football, Greaves enjoyed a successful media career. In the 1980s he worked as a pundit on ITV’s coverage of the 1982 World Cup. From there he appeared on World of Sport and On the Ball, where he partnered with Ian St John. In 1985 he became the funny half of the 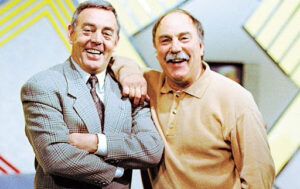 , the Saturday lunchtime football programme, teaming up with St John. Such was the popularity of the programme, which ran until April 1992, Graves and St John were immortalised in rubber and frequently featured on ITV’s Spitting Image.

Greaves and his wife Irene, whom he married at the age of 18, always shared a very special relationship. He was very concerned about her. After they got divorced, it was Irene who brought him back from the depths of alcoholism. Later on the two of them reunited and three years back, the two of them got remarried.

“I’ve known Irene longer than anybody else in my life. We’re soulmates, really. Eventually – not meaning to dwell on the morbid side of life – one of us will go before the other. I don’t really know how I would cope in that situation, to be perfectly honest,” Greaves once said.

He was suffering from a lingering illness that stretched back to a major stroke, back in 2015. As news of his demise spread, condolences poured in from around the world. However, no matter the day and age, the legacy that Jimmy Greaves has left behind, will forever be remembered. Tottenham, Chelsea, and AC Milan, all posted tweets mourning the passing of the great athlete.

Spurs’ tweet reads, “We are extremely saddened to learn of the passing of the great Jimmy Greaves. We extend our deepest sympathies to Jimmy’s family and friends at this sad time. Rest in peace, Jimmy.“