Due to the ban on female participation in sports imposed by the Taliban in Afghanistan, the international effort to evacuate members of Afghanistan’s Girls Soccer Team has come to fruition under Operation Soccer Balls.

Titled “Operation Soccer Balls”, the rescue mission of the Afghanistan National Girls Soccer Football Team is successful with ‘divine intervention and luck’. Nic McKinley, the Air Force veteran who founded the Dallas-based NGO, DeliverFund, was the primary initiator of the evacuation mission. 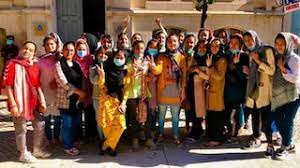 McKinley’s NGO, that mainly focuses on fighting human trafficking, recently has focused entirely on evacuating this group of adolescent girls from Afghanistan. It was an extremely risky mission with several setbacks along the way. The Talibans were keeping a very close watch on the Afghans hoping to flee the country.The girls had to make it past multiple checkpoints and even went through two failed missions.

The NGOs arranged six buses to get the girls out of Kabul. They attempted to cross the Uzbek border but were turned away there. So, they were put into several safe houses in the Afghan city of Mazhar. A huge factor in the rescue was the group strength. There were 75 souls in the group- the 26 youth team members and their families including adults and children. The girls and their family members stayed in the safe houses for almost 30 days. They were completely in a condition of ‘house arrest’ where playing Football was a distant thing as they even could not go out on streets.

After weeks of anxious waiting, the girls finally got the word that a charter flight would carry them and their families from Afghanistan. But there was the biggest challenge of getting permission from the Taliban to take them out of Afghanistan. In a twist of fate, with the intervention of international associations and global political leaders, the Taliban allowed the plane to take off, providing the girls a narrow three-hour window. “They ran out of their houses with a small backpack and the clothes on their body. They got boarding passes, they got on the flight and the flight took off. It was amazing,” McKinley said proudly.

Robert McCreary, a former congressional chief of staff and White House official under U.S. President George Bush, worked tirelessly with special forces in Afghanistan and was one of the leaders of the effort to rescue the National Girls Football Team. He said, “The world came together to help these girls and their families. These girls are truly a symbol of light for the world and humanity.” 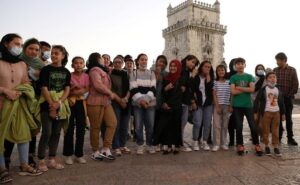 Khalida Popal, the former captain of Afghanistan’s Women’s Football Team could now have some good nights’ sleep in her house in Denmark. Now 34, Popal fled to Denmark from Afghanistan as a refugee, a decade back. She stopped sleeping when Afghanistan fell into the hands of the Taliban and used every resource at hand, to help organise the evacuation, after combining with professional players’ union FIFPro and others. Throughout the evacuation process, she kept interacting with the girls through messages, phone calls etc. to not let them lose their mental strength. She assisted them the whole way, ‘to regroup, to keep up hope and not give up’.

Popal has given her all to evacuate the female players, and now that she has succeeded, she is even more determined to continue fighting for the emancipation of the female residents of her native country, where the Taliban prohibit female participation in sports. “We are trying to get more players out of Afghanistan. We’ll do everything possible to get our players out,” said Popal.

Safe and sound in Lisbon, the girls can breathe easy again. They have political asylum now and can move freely on roads.They will soon be called Portugese citizens, or even they have a choice to move to any other country. 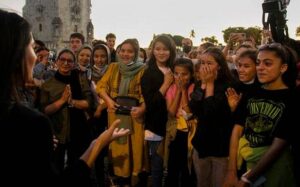 In Lisbon, the girls were in for another surprise, when the captain of the Afghanistan Women’s squad, Farkhunda Muhtaj, flew to Lisbon to meet up with the group. Muhtaj has also spent weeks helping arrange their recent rescue from Afghanistan. The whole setting made for an emotional reunion on the banks of the River Tagus. “They have dedicated so much, they have been so resilient, and to finally see them in person has been so emotional because I knew how much they went through,” Muhtaj said.

With the girls moving from one safe house to the next to avoid capture, Muhtaj, who is also a teacher, tried to calm them down using virtual exercise and yoga sessions. She gave them homework assignments, which included writing autobiographies. Muhtaj also had a session of football practice with the girls at a football ground in Odivelas, outside of Lisbon. “They can’t fathom that they’re out of Afghanistan,” she said.

A few of the girls spoke to the Associated Press with the help of an interpreter. Despite their dreams of becoming a movie producer, a director, an engineer, all of them have one common dream. They all dream of becoming professional Football players. Wida Zemarai, a former goalkeeper and coach of the Afghanistan Women’s National Football Team said, “They can dream now. They can continue to play.”