World Boxing icon Manny Pacquiao made the announcement of his retirement by saying that  this was the end of the line for him from what he called the “greatest sport in the world”, so that he can get into the ring for ‘the biggest fight of his career’.

Born in abject poverty, Manny Pacquiao was the fourth child of his parents. His family struggled to survive and it is said that Manny went without meals many times in his childhood. But Boxing seemed to be his destiny when he was introduced to the sport at the age of 12 by his uncle Sardo Mejia. He started to train under Mejia in a makeshift home gym and soon earned the title of Best Junior Boxer. 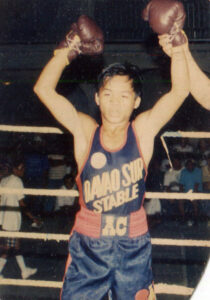 After 6 months of training, Pacquiao made the decision to move to Manila in hopes of becoming a professional boxer. He left home at 16 and reached Manila. Pacquiao stepped into the ring for his first professional bout, against Edmund Ignacio. He won in four rounds,thus beginning his two-decade long Boxing career. Since then, Pacquiao won World Boxing Titles in eight different weight divisions starting with the World Boxing Council Flyweight Title- his first major championship win in December 1998.

The ‘Pacman’, famous for his impeccable footwork, speed and quick jabs, defeated 22 world champions in his career. He was voted the Philippines’ Person of the Year’ over President Gloria Macapagal Arroyo in 2003. He was also named “Fighter of the Decade” for the 2000s by the Boxing Writers Association of America.

In 2007, Pacquiao ran for a seat in the House of Representatives of the Philippines but was defeated. However, in 2009, he formed a new political party, the People’s Champ Movement, and gained the confidence of people. Pacquiao won in a landslide to become the representative of Sarangani province in 2010. He won his second term too and ultimately in 2016 he won a seat as a Philippines senator.

As a Philippines senator, Pacquiao divided his time between politics and fighting. Though often being referred to as an ‘absentee congressman’, Mammy Pacquiao made a gradual but steady progress from being the pugilist to one of the most popular figures in Phillipines. Earlier this month he announced his intention to run for President in the 2022 elections. “To government officials who continue to rob government coffers, you will soon find others in jail,” Pacquiao said on September 19 as he announced his candidacy. 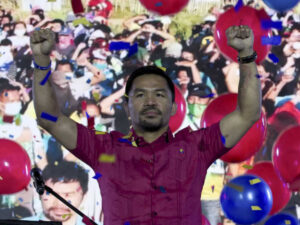 As Mammy Pacquiao set his sight on the Presidential seat, he decided to officially hang up his gloves. The great fighter posted a 14-minute video on both social media platforms – Facebook and Twitter. “I just heard the final bell. Boxing is over,” said an emotional, 42-year-old, Pacquiao. He later continued, “I never thought this day would come“.

His announcement was met with a myriad of emotions and reactions from his fans that ranged from disbelief to gratitude. Best wishes and messages flooded in from different parts of the global boxing community. Former world lightweight champion and Pacquiao’s sparring partner, George “Ferocious” Kambosos Jr, from Australia, tweeted, “Thank you for everything you did for my Career #Legend.”

Pacquiao will easily go down as one of the most offensive fighters to ever grace the sport of boxing, thanks to his quick footwork and lightning-fast punches. He has made it abundantly clear that he is at peace with his decision, and believes that it is time for the next generation of Filipino boxers to be in the limelight.

“As I hang up my boxing gloves, I would like to thank the whole world especially the Filipino people, for supporting Manny Pacquiao.”