A host of new high-tech sports depending on technological innovations, artificial intelligence, robotics and others, are kicking off in different parts of the globe.

Robots playing football on the field or races between pilot-controlled drones- futuristic sports are now being created  through technological innovations, even rules and strategies are drawn by artificial intelligence. Though these ‘futuristic’ sports may sound like things of the future, but many such sports really exist. 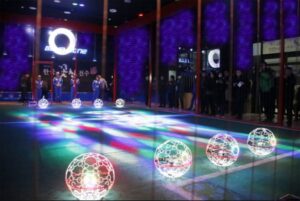 A research team from CAMTIC Institute of Technology at Jeonju city in South Korea introduced Drone Soccer in 2019. The sport has teams of 3-5 pilots who face off at either end of a cage, representing the soccer field. On each end there are two rings suspended by ropes which are the goals. Since they are suspended, a drone can bump into it and swing out of the way.

The soccer balls are drones fitted with 360-degree cages, which ensures the drones can crash without any damage. There are different colored LED lights attached to the cages to identify each team’s ball. In a treble of  ‘3-minute’ set, the pilots try to fly their “striker” drone through their opponent’s goal, to score points, as the opposition drones try blocking them.

The first international tournament of Drone Soccer, The 2018 Robo Universe Drone Soccer competition, took place on June 30th 2018 at Goyang city in South Korea. Twenty two teams comprising of over three-hundred people competed in the tournament. The sport has started garnering attention in the US with Colorado, New York, Ohio, and several other places hosting Drone Soccer Leagues. The sport is also starting to be introduced in high schools. 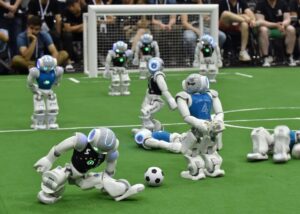 The Soccer Robot has gained much popularity in this new-age world of sport. The RoboCup (the Robot SoccerWorld Cup Initiative) is an annual competition for autonomous robots since 1997. The sport already has multiple existing leagues- the Standard Platform League, Small Size League, Middle Size League, Simultaneous League, Soccer Simulation and Humanoid League.

RoboCup teams use human-shaped robots with advanced Artificial Intelligence (AI) software systems that enable them make decisions for themselves and effectively communicate with their teammates.

It’s been a long journey for Robot Soccer since the first RoboCup in 1997, in which a total of 40 teams participated, with 5,000 spectators in attendance. The 2021 edition of the RoboCup featured over 300 teams. The robots of the present day can locate the ball reliably, move much faster, and they have started showing teamwork qualities.

There are different types of robots used in different leagues. In the Standard Platform League, teams all use the same robot so the focus is on their development of AI software. But in the Humanoid League, teams design and build their own robots so they have to develop both their own AI and the physical robotics.

The ultimate goal of the RoboCup is to have a team of fully independent humanoid robot Football players by the year 2050 who will be able to play against the best humans in compliance with the official FIFA rules. 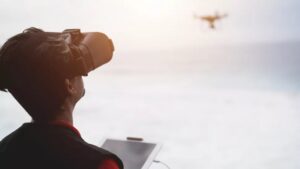 Drone Racing began in Germany in 2011 when a number of amateur pilots got together to race with their drones equipped with cameras. In first-person view Drone Racing,  there is a live streaming footage from a camera mounted on the nose of the drone which the pilots watch wearing goggles. This view makes the pilots feel like they are flying the drones by being present inside them.

In terms of leagues, the global leader in drone racing competitions is the Drone Racing League (DRL). In this event, global professionals participate who has custom-built racing drones travelling at 145 Km/hour. Elite pilots take part in the DRL, which has been televised by several major networks. Other FPV organizations include MultiGP a global drone racing league with over 14,000 members, and the International Drone Racing Association, responsible for governing Drone Racing events across the world. 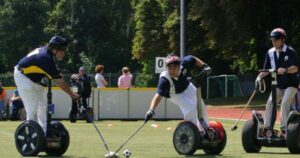 Polo on wheels- that is what Segway polo is in one line. A team sport, invented by Dean Kamen way back in 1999, where each player moves around on a Segway – a two-wheeled, self-balancing electric vehicles- while attempting to score by hitting a ball past the goal line with their mallet. A goal can not be scored off of any part of a player’s body or Segway unless it occurs accidentally.

In Segway Polo, the rules have been adapted from Bicycle Polo where a regulation match consists of four 8 minute quarters. The sport has its origin in the USA but has now spread to Germany, Sweden, the UK, Barbados, Spain, Lebanon, and several other nations.

However, the growth of Segway Polo has been hampered by a string of accidents. Former US President George W. Bush famously fell of from the Segway and James Heselden, the company’s owner, died after he lost control of his scooter and fell off a cliff.