The RYP Tournament is the only National Ranking Tournament of Pickleball in India whose 2nd edition was held on 4th and 5th December 2021 at the Olympic Sports Centre in Palava.

After its successful completion, Sunil Valavalkar, the Founder Director of AIPA, who was involved both as an administrator and as a player wrote about his first-hand experience for Sportsavour. 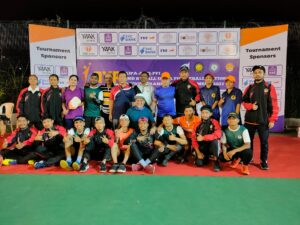 “Just concluded the 2nd RYP Open All India Ranking Pickleball Tournament. It was an epic event on number of counts. There is no surprise that each passing tournament of Pickleball in India  is setting up a new benchmark. However the 2nd RYP Open tournament has set up such high standards which definitely will give tough competition to future tournaments.
Starting from 17  state-of-the-art outdoor courts, delicious food being served with modern staying arrangements for players, and  cash prizes over Rs. 4 lakhs and many goodies to every player, have made this tournament a truly historical event.

The scale of the RYP tournament was huge, and the skill level was unbelievably high. There were so many new players, super talented, who posed real challenges in front of the seasoned players.Watching the game of the golden girl  Snehal from Jalgaon and golden boy  Sonu Vishwakarma from Jharkhand was a mesmerizing experience.

Besides these top two players, the other new and old players gave their 100 percent effort to raise the bar of the tournament. Every match, from league bracket till knock-out rounds, was fiercely fought and was efficiently supervised by the dedicated team of referees of Pickleball India.
All 17 outdoor courts were properly lighted and professionally designed which gave a global playing experience for all players. The unexpected December rain was a great challenge as the officials have to press themselves hard in keeping the court lines time and again. However due to  indomitable spirit of the organizers, the tournament was conducted with out compromising with any set guidelines and rules. Undoubtedly all the players also supported the organizers and hence it was a perfect bond between players and organizers which made this tournament a truly magnificent event.

The tournament was played under 5 major categories, further sub divided into Singles, Doubles and Mixed, thus making a total of 19 categories. Trying hard to mention the names of all the gold medal winners: