Badminton has a rich history which is said to have developed in the 17th century. It was during that time a recreational sport was played in many European countries that was known as Battledore and Shuttlecock 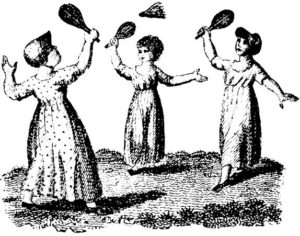 (Battledore was the older form of raquet). The activity involved two players hitting a feathered shuttlecock back and forth with a bat.

Some historians believe that Badminton is an improved version of Ti Zian Ji- a Chinese game that was once popular with players using their feet instead of racquets to hit the shuttlecock.

In 1863, an article in The Cornhill Magazine- the literary journal of London- described Badminton as “battledore and shuttlecock played with sides, across a string suspended some five feet from the ground.”

Though an European sport, Badminton evolved in British India. British military officers stationed in India played it as a recreational sport.As the sport was mainly played in Poona (modern Pune), the sport came to be called Poonah.

Perhaps the name was still not derived at that point of time. It was when the game was re-introduced in England from British India, the Duke of Beufort popularized this sport among his guests at his Badminton House in Gloucestershire, England. It was in this way that the sport got its name adding to Badminton’s history.

Till 1887 the sport was played as per the rules drawn in Poona by British officers. However, in 1898 a new set of rules was drawn and the first Open Tournament was organised at Guildford.

Previous “Pickleball has helped me to gain recognition amongst the best players…….”
Next “I find Pickleball more exciting than other sports that I play…….”