UPDATES
Home / EXCLUSIVES / “This organisation has gone from being toxic, almost criminal, to being what it should be……” Gianni Infantino, President-FIFA

“This organisation has gone from being toxic, almost criminal, to being what it should be……” Gianni Infantino, President-FIFA

Gianni Infantino was re-elected FIFA president unopposed at the 69th Congress of FIFA in Paris. The 49-year-old Swiss was the only candidate and the traditional vote was replaced with a round of applause at the Congress. Infantino replaced disgraced former president Sepp Blatter in February 2016, serving a shortened first term after his predecessor’s impeachment. After his re-election, Infantino will now serve a full four-year presidential term through 2023. 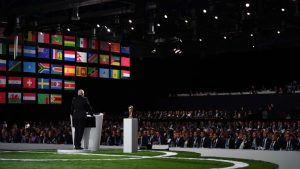 However, there have been scandals under his leadership, including the loss of elected council members amid corruption allegations and financial misjudgements.During Infantino’s first term, senior vice president David Chung was banned for six and a half years. Ghana Football Association (GFA) chief Kwesi Nyantakyi was banned for life. Sheikh Ahmad of Kuwait withdrew his re-election candidacy after being accused of voter bribery. Reinhard Grindel resigned from his seat on the FIFA executive council over a conflict of interest after accepting an expensive watch as a gift. Infantino, himself, was investigated, by the FIFA ethics committee for his use of private jets. But the investigators and judges involved in the case later left their roles within a year.

But Gianni Infantino overcame these shortcomings and succeeded in becoming the President of FIFA unopposed. Following the formalities of election, he greeted the annual gathering for the presidents and officials of 211 countries. In his speech he first thanked all for his re-election and claimed that it is ‘a new FIFA’ that has transformed from pariah status since his election in 2016.

Gianni Infantino: We were told it was a racist, violent and autocratic county but what did we have? We had a party atmosphere because football unites. So we need to say thank you Russia, it was perfectly organised, it was a celebration.

Gianni Infantino: It’s the biggest success story. It has become an integral part of football inside one year. It doesn’t change the game, but it helps and cleans the game. It brings justice to the game. It’s not perfect but it’s very close to perfection.

Gianni Infantino: We know that clubs are the heartbeat of the game, they train the players. We need to offer clubs a chance to shine on a world stage and to challenge for a World Cup. 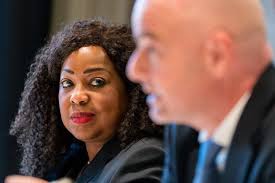 Gianni Infantino: First steps had been taken towards getting more women into senior positions at FIFA. Women were allowed to watch the Asian Champions League final in Tehran for the first time in 40 years.

Gianni Infantino: We’ll see the explosion of women’s football – a big event, one billion viewers, athletes with technical skills and we’ll all be proud.

GROWTH OF BUDGET AND INCREASE OF CASH RESERVE

Gianni Infantino: We’re not spending it on dodgy deals, we’re investing it with you and checking that it is done. FIFA has today also the most solid financial situation ever and is coming out of the period of its worst crisis.

Gianni Infantino: My philosophy as FIFA president is one of openness and as long as I am president of FIFA I will push as hard as I can to have more global worldwide competitions, possibilities, openness for everyone to be able to play. The more we are open, the more we do, the better it is.