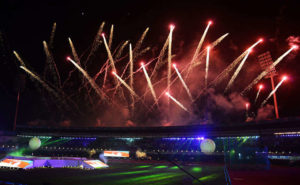 The Kalinga Stadium in Bhubaneshwar saw a glittering Opening Ceremony of the 22nd Asian Athletics Championship where more than 700 participants from 45 countries took part in the march past. India’s middle-distance ace runner Tintu Luka led the 95-member Indian contingent. 8 members of the Pakistan contingent including 6 athletes and 2 officials who were given visa at the last minute took part in the march past. They were received warmly by the spectators. Odisha’s star short-distance runner Shrabani Nanda took the oath of fair play on behalf of all the participating athletes.

Previous India win against Sri Lanka, make it 4 out of 4
Next Manpreet, Lakshmanan win gold on first day of the Asian Championships