Teenage Japanese Skateboarding sensation Nishiya Momji took home the gold medal in the Women’s Street Skateboarding competition. At just 13, she became one of the youngest Olympian ever to win a gold medal.

Nishiya Momji beat Brazil’s Rayssa Leal, to gain the top spot on the Olympic podium, thanks to her final three runs of 4.15, 4.66 and 3.43. She scored a total of 15.26. Incidentally, second-placed Leal is also 13 years old. The bronze medal went to Funa Nakayama who is 16 years old, is also from Japan. 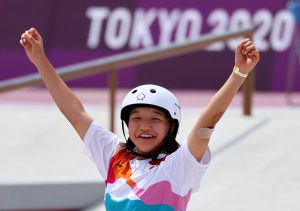 The name Momji Nishiya will go down as the first female skateboarder and the second skateboarder (after Horigome Yuto, who won gold in the Men’s event a day prior) ever to clinch the gold medal in that particular discipline, for Japan.

The young sensation was definitely experiencing some early jitters which slowly started to fade away as the competition wore on.

“It’s like other competitions. I was nervous in the first run, but I wasn’t after that.”

Nishiya is not someone to shy away from giving an answer, when questioned about what her goals are.

“I want to be the famous one who everyone in the world knows. I want to win at Paris 2024 too.” 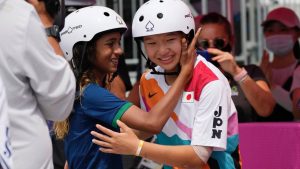 Despite being beaten to the top spot by Nishiya, Rayssa Leal also made headlines since she is not only Brazil’s youngest-ever Olympian, but also Brazil’s youngest-ever Olympic medallist. This is what Leal, the youngest Olympic medallist since 1936, had to say, “I feel very happy. I made history at 13 years old. I hope I can be at many other Olympic Games.“

Previous Day 3 Heartbreak: Bhavani Devi and Pranati Nayak bow out of the Olympics, but to very different tunes
Next Day 4 Glory: From Assam to Tokyo; Indian pugilist Lovlina Borgohain is one win away from an Olympic medal