Harvinder Singh beat South Korean Kim Min Su, 6-5, to bag the bronze medal in the Men’s Recurve event at the Tokyo Paralympics and became the first Indian archer to win a medal at the Paralympics.

In a thrilling encounter, the Indian archer held his nerves to emerge victorious with a 10 in a shoot-off where the South Korean could only muster an 8. Both the archers had finished at 5 set points each at the end of 5 sets. This took India’s medal tally to 13. 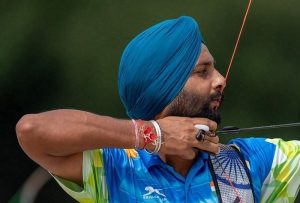 Harvinder Singh began the day with a 6-5 win over Italian Stefano Travisani, in the round of 32. Then he pulled off an identical victory against Bato Tsydendorzhiev of the Russian Olympic Committee in the round of 16. After those couple of nervy encounters, Singh won comfortably against German Maik Szarszewski in the quarterfinal, with a score of 6-2. American Kevin Mather, who went on to win the event, defeated Singh 6-4, in their semi-final match.

Hailing from Ajitnagar of Haryana’s Kaithal district, Harvinder Singh belongs to a farming family. At the tender age of one and a half, Harvinder was infected by dengue fever. But an injection from a local doctor had an adverse effect on young Harvinder. His legs stopped functioning properly and he had difficulty in walking.

As Harvinder grew up, he understood that his shortcomin had become a burden for his humble father. So he accepted his fate and convinced his parents not to undergo further treatment. He continued his studies and presently pursuing a doctorate in Economics, at the Punjabi University in Patiala. 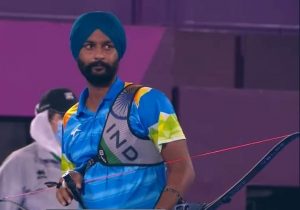 Harvinder started Archery after he witnessed the broadcast of Archery from the London 2012 Paralympics on television. Since then, he has been practicing every single day. “It was very difficult,” said Singh, when talking about balancing archery training with his studies. He generally trains a couple of times each day and carries out his studies in the afternoons, or late in the evenings.

His multiple medals in archery at the national level are testament to the fact that was able to balance both his studies and training really well. In 2017, Singh finished 7th in his international debut at the Para Archery World Championship in Beijing. But one year from then, in 2018, he won the gold medal at the Jakarta Asian Para Games. Not one to shy away from his studies, 15 days before the start of the 2018 Asian Para Games (his 3rd international competition), Singh was busy submitting his thesis synopsis.

Being a hard nut to crack, Harvinder Singh did not let COVID rule away his preparations for the Games. His father supported by turning their farm into an Archery range. Harvinder became the first Indian athlete to clinch a gold medal in Para archery at any major tournament after Jakarta 2018.

He received a huge amount of government support for the win, which allowed him to provide financial support for his family, and devote more time to training.