Indian shooter Manish Narwal  decimated the Paralympic record to pick up gold in the Mixed 50m Pistol SH1 event. Fellow shooter Singhraj Adana secured the silver medal in the same event to give India a sensational one-two finish on the podium for India in Tokyo Paralympics.

As per the Paralympics rule, an athlete designated in SH1 category have an impairment that affects one arm and/or their legs. For example their impairment can be the result of amputations or spinal cord injuries. A few athletes compete in a seating position, while the rest shoot while standing up.

19-year-old Manish Narwal was born with a deformity in his right hand. In spite being a normal child, Manish’s quite attitude worried his father, Being a sportsman himself, Dilbagh Narwal did not want his son to stay at home and brood. He searched for the right sport for Manish that would require one hand to excel. Thus started the journey of a 14-year old boy in Shooting. 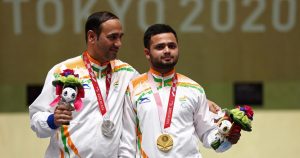 Manish is the world record holder in Men’s 50m para pistol event. In the Paralympic final, he shot a total of 218.2 points to clinch the gold in his maiden Paralympic campaign. On the other hand, 39-year-old Singhraj Adana, who won a bronze earlier in the P1 men’s 10m air pistol SH1 event, also added a silver to his kitty, after he shot a total of 216.7 points. Earlier in the qualifying round, Narwal had picked up a total of 533 to qualify for the final in seventh place, while Adana qualified for the medal round in fourth place with 536, at the Asaka Shooting Range.

Adana had a better start than Narwal in the finals and was leading the table after the opening 10 shots, with 92.1 points. Narwal however had a very jittery start to the final, and was only able to muster a total of 87.2 in the 1st competition stage. Then both the Indian shooters stepped up when it mattered the most, and held their nerves against the early charge of the Chinese duo, in the elimination stage. At one point, Narwal dramatically slipped down and out of the medal spots, to the 4th position, after his 18th shot. However, he made a mind-blowing comeback with his 19th and 20th shots. The sensational Narwal, who has an impairment in his right hand, shot 10.8 and 10.5 to secure the pole position from Adana. Adana also created history with his silver, because he became the second Indian in this edition of the Games (after Avani Lekhara) and the third-ever Indian athlete to win multiple medals at the Paralympics.

India’s Olympic hero Abhinav Bindra was ecstatic after the win of Manish Narwal and Singhraj Adana. His tweet reads, “1-2 for India! The stuff of dreams…Gold for Manish Narwal with a Paralympic record in mixed 50m SH1! And Silver for Singhraj Adhana, his second medal of the Tokyo Paralympics. Just incredible.”