Sumit Antil did not only break the previous world record of 62.88m (which had also been set by him), but also set and broke his own world record thrice on his way to the gold medal spot at Tokyo Paralympics. His best attempt of the day was a humongous throw of 68.55m, which landed him the pole position with a certain air of ease. Australian Michael Burian came second with a 66.29m throw, and Dulan Kodithuwakku took home the bronze medal thanks to a 65.61m throw. The F64 category is for those athletes who have a leg amputation, but compete using prosthetics in a standing position. 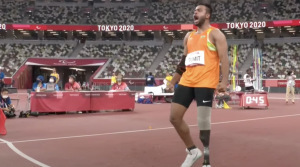 23-year-old Sumit from Sonepat in Haryana ensured that the whole world would have to remember his name. His sheer dominance on the day was simply too much for the other athletes. In his very first attempt, he started off with a 66.95m throw which in itself would have been enough for him to pick up the gold medal. It also broke his previous personal best of 62.88m. Then he took it one step further in his massive second attempt which recorded 68.08m and increased his lead over the rest of the field, just a little bit further. Even his following couple of attempts – 65.27m and 66.71m, would have broken his own record (62.88m), set at the 2019 World Para Athletics Championships in Dubai. But the Indian made it a night to remember for all Indians by making a behemoth of a throw on his last successful attempt, which recorded 68.55m on the scoreboard and put his name in the history books. Unfortunately, his final attempt was deemed as a foul throw. In the end, his scores read 66.95, 68.08, 65.27, 66.71, 68.55 and foul. 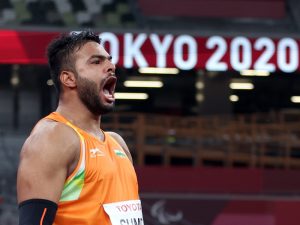 Sumit Antil, a student of the Ramjas College in Delhi, used to be an able-bodied wrestler before he met with a gruesome accident 6 years back. In 2015, Antil was involved in a severe motorbike accident which resulted in doctors having to amputate his left leg from below his knee. It was three years later in 2018, when he was initiated to para javelin by a para athlete in his village. In fact, Antil has also gone up against javelin thrower and Olympic champion Neeraj Chopra in the able-bodied Indian Grand Prix Series 3, that was held on the 5th of March in Patiala. Antil secured the seventh spot with his best attempt of 66.43m, as he watched Chopra demolish his own national record, with a huge 88.07m attempt.

However, after breaking the world record five times on his way to gold, Sumit Antil vowed to better his incredible performance. He said, “This is my first Paralympics and I was a little nervous because the competitors are great. I was hoping for a 70-metre-plus throw, maybe I can do 75m. It was not my best, I am very happy to break the world record.”