Praveen Kumar’s Asian record anded him the second spot behind Jonathan Broom-Edwards from Great Britain. Edwards secured the gold with a 2.10m effort, which is also a season’s best for him. 2016 Rio champion Maciej Lepiato of Poland filled up the remaining third spot on the podium, thanks to his best effort of 2.04m. 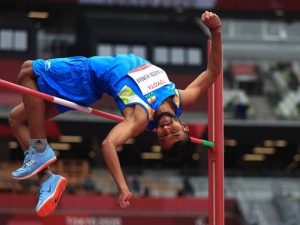 The T64 category is for those athletes who have a leg amputation, and compete using prosthetics in a standing position. Kumar has the disability classification – T44,  but is also eligible to compete in T64. His congenital impairment affects the bones connecting his hip to his leg. One of his legs is shorter than the other since birth. The T44 classification is for athletes who have a leg deficiency, leg length difference, impaired muscle power or impaired passive range of movement in the legs.

At 18 years old, Praveen Kumar became the youngest Paralympic athlete for India, as he walked out onto the Paralympic venue. Since he started playing the sport in 2019, this was also Kumar’s personal best performance and his first major medal.

“I can’t explain how I feel. This jump was ecstatic. This is my first Paralympic Games and I am waiting to see what lies ahead.”

“My confidence was boosted immensely after I jumped 2m. It was a little low before, but after I jumped over that 2m mark, it just skyrocketed. Now, I’ve done 2.07m, and that is a massive leap. I credit my coach with this feat.”

Unfortunately, all his three attempts for the 2.10m mark were unsuccessful, something which Broom-Edwards cleared in his second attempt. Kumar became the fourth medal-winner for India in Men’s High Jump at the Tokyo Games, and he is also the youngest Indian to win a Paralympic medal from the contingent that travelled to Tokyo. Kumar has a World No. 3 rank in the T44 classification.

In the first year that he had taken up high jumping, Kumar secured a silver medal at the Junior Para World Championship in 2019. Then he won the World Para Athletics FAZZA Grand Prix 2021, Dubai, by setting an Asian Record. He started participating in sports with his school friends, and had originally taken up Volleyball as his favourite game. Once in his childhood, he happened to take part in an able-bodied High Jump event. Only after that did he come to know that there are sports for the differently-abled as well. He has undergone training under national coach Dr. Satyapal SIngh.

An ecstatic Kumar talked to journalists about his support system, his parents, after his medal-winning campaign.

“Right before the competition started I spoke to my parents and they said, ‘whatever you can do, go ahead and do that, don’t put too much pressure on your head – we are happy with what you’ve already achieved’. They will be very, very happy.”