The athletes who fall under the F46 category have some kind of an arm deficiency, impaired muscle power or an impaired, passive range of movement in arms, while competing in a standing position.

Devendra Jhajharia, had met with an unfortunate accident in his childhood when he lost his left hand. While trying to climb a tree as an 8-year-old boy, he accidentally held an electric wire. Despite being rushed to a hospital the doctors said that his hand would have to be amputated. 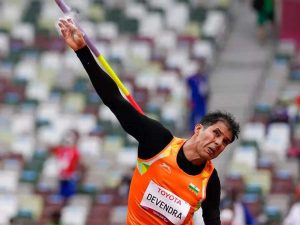 Against all the odds, the now 40-year-old went on to become India’s most decorated Paralympian with his 2 gold medals. Even in Tokyo he seemed well on his way to a third Paralympic win, when he made a new personal best throw of 64.35m, in his third attempt. His previous best of 63.97m has also been a world record. Unfortunately for him, 35-year-old Dinesh Priyan Herath Mudiyanselage from Sri Lanka was simply too good and set a new world record of 67.79m, to bag the gold medal. It was a mammoth throw that exceeded the previous world record, by nearly 4 metres.

With this silver Jhajharia now has 3 Paralympic medals in his kitty. After javelin thrower Neeraj Chopra’s historic gold at the Tokyo Olympics, the Javelin Throw event was something everyone had an eye on in the Tokyo Paralympics.

“Neeraj’s gold medal has put the spotlight on javelin throwers and being the senior most of the lot, I can say this with assurance that after Tokyo Paralympics, javelin will be the second most popular game in this country after cricket,” Jhajharia said. 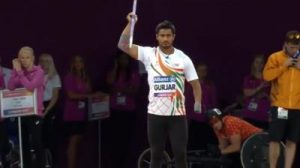 Another Indian on the field, 25-year-old Sundar Singh Gurjar, lifted the bronze medal with a commendable 64.01m, to fill up the third podium spot. This is a huge turnaround for Gurjar, since the 2016 Paralympics, in which he could not compete, after turning up late for the event.

Based in Jaipur, Gurjar lost his left hand 6 years back. He met with an accident at a friend’s place in 2015, when a metal sheet fell on him. He has already won gold in both the 2017 and 2019 World Para Athletics Championships. He was also the silver medal-winner at the 2018 Jakarta Para Asian Games. 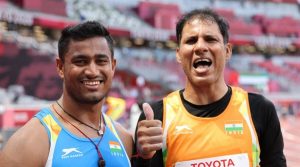 In the Javelin Throw finals at the Tokyo Paralympics, he went first among all the Indians. He made a strong start with a 62.58m attempt, which was a season-best for him. He saw the red flag for both his 3rd and 4th attempts, before he redeemed himself with a 64.01m 5th attempt, which landed him the bronze.

An overjoyed Gurjar took to Twitter after his win, ”I am elated to win the bronze medal in the Paralympics. I want to thank my coach Mahavir Saini who trained me from 2009 to 2021 & stood by me in bad times. I also want to thank my family, SAI & PCI for support & PM Modi for motivation,”.

India has already almost doubled the medal count at the Paralympics in Tokyo, in comparison to the 4 medals they had picked up in the 2016 edition. India now has 7 medals in total, including a gold medal – picked up by shooter Avani Lekhara.