Yogesh Kathuniya bagged the silver medal in the Men’s F56 category Discus Throw event at Tokyo Paralympics. It was a heroic win, as he made a mammoth 44.38m throw, in his sixth and final attempt to claim second place.

In Tokyo, Yogesh Kathuniya did not make things easy for himself in the Discus Throw finals. Starting off with a foul throw on his first attempt, he made a good comeback with a 42.84m throw in his second attempt. However his 3rd and 4th attempts were both deemed foul throws again. Finally with just 2 attempts remaining, the stupendous athlete inside the 24-year-old seemed to really come to life. Registering back to back scores of 43.55m and 44.38m, in his 5th and 6th attempts respectively, Kathuniya finished off in style and picked up the silver with his last attempt. 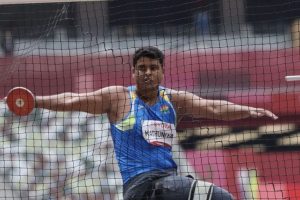 Born to an Army man, Yogesh Kathuniya has graduated from New Delhi’s Kirorimal College in B.Com. During his time at the KMC, a number of coaches realised the immense potential that the young discus thrower possessed. Soon Satyapal Singh took Kathuniya under his wing at the Jawaharlal Nehru Stadium. A few years after that he came under the tutelage of coach Naval Singh.

In 2018, Kathuniya set a world record in the F36 category at the Para-athletics Grand Prix in Berlin. It was his first ever international competition and he made a best throw of 45.18m. The mammoth throw steered clear of the earlier world record of 42.96m by more than 2 metres. Kathuniya was also the bronze medal-winner at the 2019 World Para Athletics Championships in Dubai. That is what booked him a berth at the Tokyo Paralympics.

In his childhood, an 8-year-old Yogesh suffered a rare neurological disorder called Guillain-Barre syndrome causing quadriparesis – a condition that causes muscle weakness in all four limbs. Yogesh was confined to a wheelchair with physiotherapy only the option to revive. It was then his mother Meena Devi who decided to learn physiotherapy to ensure her son stands on his feet sooner than later.

In Bahadurgarh, Haryana, it was scenes of complete euphoria as friends and family of young Kathuniya could be seen celebrating by dancing and distributing sweets.