Indian shooter Avani Lekhara etched her name in the history book as the first Indian woman to win a Paralympic gold.

At the age of 11, Avani Lekhara suffered a horrific car accident which caused severe injuries to her spinal cord. Since then she has been bound to a wheelchair. While searching for a meaning to live life in that tender age, Avani came across Olympic gold medalist Abhinav Bindra‘s autobiography, A Shot At History. She got inspired and thought of trying her hands in Shooting. She got her father by her side who encouraged her to channelise her frustration through the sport.

And there stood Avani, in 2015, winning her first Shooting medal at her very first State Championship in Rajasthan. Currently ranked number 5 in the world, Avani Lekhara won a silver medal at the IPC Para Shooting World Cup in 2017. In 2019, she won silver at the Para Shooting World Cup at Osijek in Croatia. Lekhara won the gold at the first National Para-Shooting Championships in the Women’s 10m Air Rifle SH1 in 2021. 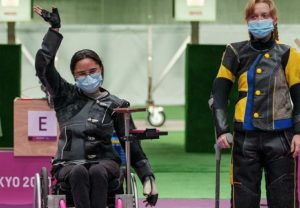 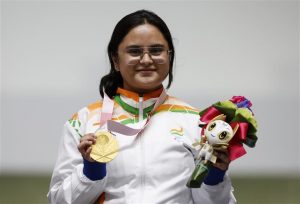 Avani Lekhara’s sensational international performance won her a berth in the Tokyo Paralympics. She qualified for the final by finishing seventh in the qualification round with a total of 621.7 in S1 category. In the SH1 Rifle category, shooters have an impairment in their legs and are able to hold a gun with arms. Some athletes compete in a seated position, while others compete in a standing position.

In the final of the event, Avani was in sterling form from the beginning. On her way to the gold medal, she equaled the world record and set a new Paralympic record while an impressive total of 249.6. China’s Zhang Cuiping won silver with a total of 248.9, while Ukraine’s Iryna Shchetnik won bronze with a score of 227.5.

“I can’t describe this feeling, I’m feeling like I’m on top of the world. I’m so happy I could be the one to contribute,” Lekhara said after her win.

Avani Lekhara is the fourth Indian to win a gold at the Paralympics after Murlikant Petkar won in Swimming in 1972, Devendra Jhajharia won in Javelin Throw in 2004 and 2016 and Mariyappan Thangavelu in High Jump in 2016.