Vinod Kumar loses his bronze medal in Discus Throw F52 as he was designated as ‘Classification not Completed.” 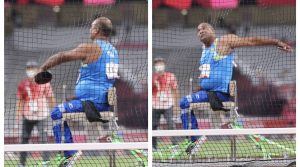 Vinod Kumar’s classification was done on 22 August. He competed in the Men’s Discus throw F52 category and won bronze medal with an area record. He produced a best throw of 19.91m to finish third behind Piotr Kosewicz (20.02m) of Poland and Velimir Sandor (19.98m) of Croatia. But soon after the declaration of the winners, the result was put on hold after a protest over his disability classification.

Para-athletes are classified depending on the type and extent of their disability. The classification system allows athletes to compete those with a similar level of ability. After a detailed scrutiny, the technical delegates of Tokyo Paralympics issued a statement declaring that Vinod Kumar’s bronze medal would not be considered. 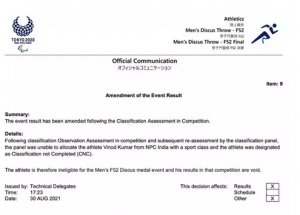