When Anirban Lahiri rings the bell to a brand-new season on the PGA Tour, he will undoubtedly be focused to the hilt at the first tee box of the Sanderson Farms Championship. But going in there has been a quiet reflection as well.

Without getting into the plethora of emotions the Lahiris have been through this year due to the pandemic, the bottom line is Anirban Lahiri is just happy to tee off. Of course, the body is rested now, and preparations have happened in the gym to strengthen it the last few weeks, but when the mind goes back to the manic times starting April-end, there is thanksgiving for emerging out of that phase, not unscathed though.

“COVID has altered our perspective, especially my wife’s (Ipsa). She was recovering herself when I contracted the virus, and in that state of health she drove me to hospital, unsure whether I would make it back.” 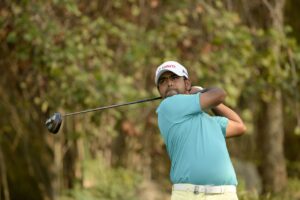 Anirban walked out of hospital thankful to have beaten the virus, but victory in that pitched battle exacted a cost. He lost 7.5kg in nine days. The way back was painful and not a pretty sight for the family and childhood coach Vijay Divecha, who was present when Anirban got infected.

At that juncture, Anirban was “literally playing for my job” on the PGA Tour and imagine the state of mind when he could not hit more than four wedge shots at a go after getting back to practice. There was more to it.

“I lost quite a lot of club speed and was hitting it shorter than I did as a 14-year-old.”

In such a scenario, the AT&T Byron Nelson on comeback was like clutching at the straws and Anirban was happy “just to tee off in Dallas”. Then, there was the predicament of whether to take the flight to Tokyo after making the Olympics cut in Golf. In normal times, it would have been cause for celebration, but with a body made feeble by a draining fight, and far from securing his playing rights in the US for 2022, it was a dilemma.

“Many in my team questioned the move to go to Tokyo.”

That’s the way it has been for a man who has seen the olive Indian Army uniform from close quarters. Even had he not made the top-125 on Tour for the new season, Anirban would have placed the two-time Olympian tag ahead of the Tour card. It was a risk, but Anirban is not new to treading the thin line and walking away with some gains. In this case it was making the FedExCup playoffs after a late rally.

The exclusive news portal on Indian Golf that goes beyond mundane news and views.
Previous India gets its first Sports Arbitration Centre to fast track disputes in the sports sector
Next Boxing great Manny Pacquiao retires from sport to follow his political dream