Inaugurated by Union Law Minister Kiren Rijiju, the Sports Arbitration Centre will serve as an independent body that will fast track disputes in the sports sector. According to Rijiju, the body is sure to have “a far-reaching impact” and will go on to be an important factor in the expansion of India’s sports sector. 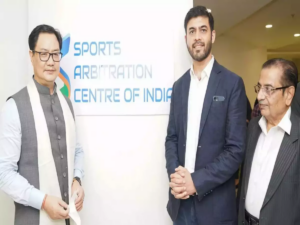 The sports sector in India is expanding; thus it can be predicted that different issues will be raised by various stakeholders. Hence, the Sports Arbitration Centre of India or the SACI will surely offer the provisions necessary for resolving the issues that come up. Kiren Rijiju said, “When (sports) is an industry, there will be lots of commercial involvement. Then stakes will be very high. When the stakes are high, you must have the mechanisms to redress and address those issues. This (SACI) is on the line of alternative disputes resolution.”

SE TransStadia Pvt Ltd, based in Ahmedabad, is promoting the SACI as an independent body. The SACI will also have all the legal backing from the Ministry of Law and Justice. According to Rijiju, “The SACI will have a far-reaching impact for the sports sector of the country by creating a reputation and establishing credibility for itself through the provision to settle disputes and other issues and concerns of the sports sector in a fast, transparent and very accountable manner.”

The minister has assured that every necessary preparation has already been jotted down and taken care of. He believes that the next logical step is to ensure that the SACI is headed by credible people. Udit Sheth, the founder and Managing Director of TransStadia, said that the SACI is going to list out a few known ‘independent’ arbitrators and that it has nothing to do with the company. Sheth said, “Those arbitrators can be listed out and paid directly by the disputing parties and settle the issues. We only provide this centre and the process, so that it goes through a process, which is governed under the international laws of sports.”

Previous Shiva Thapa: The 5-time Asian Boxing Champion gears up for his 2nd World Boxing medal
Next Anirban Lahiri focuses to start afresh a new season on the PGA Tour