Hailing from Gulmarg in Kashmir, India’s Alpine Skier Arif Khan is now the first Indian athlete from the country to seal a berth for two separate events at a Winter Olympics- Slalom and Giant Slalom.

A ‘teenager’ at heart, 31-year-old Arif Khan earned a spot in Slalom ForBeijing Winter Olympics at an Federation Internationale de Ski (FIS) event in Dubai. A month later, he achieved qualification for the Men’s Giant Slalom event at the 2022 Winter Olympics. The Jammu and Kashmir man made the Giant Slalom cut during the (FIS) meet held at Kolasin, Montenegro.

It was an arduous task for Arif Khan to pursue an ‘expensive’ sport like Skiing. He was majorly dependent on his father, Yasin Khan,  who poured out all his income from the ski equipment shop he owns, on his son’s career. Arif can often be seen working as a ski instructor to pay for remaining expenses. 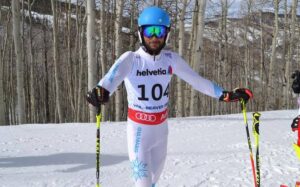 Arif is still the sole athlete from the country to secure a position for the 2022 Winter Games. Women’s Giant Slalom bronze medal-winner Aanchal Thakur, is another Indian athlete, who can still secure qualification, according to an official report. The average of the five best results of an athlete, in the events taking place from July 1, 2019, to January 16, 2022, is considered for them to compete in the Giant Slalom or Slalom events at the 2022 Winter Olympics.

Any Alpine Skier who has competed in less than five events during the aforementioned period, an added 20% of the athletes’ average points is added to the International Ski Federation (FIS) points list. At the 2018 Winter Olympics in Pyeongchang, South Korea, India had two representatives – Jagdish Singh competed in the 15km freestyle event of Cross-Country Skiing while Shiva Keshavan took part in Luge. Khan had returned to crowd funding to compete in Pyeongchang, 2018. Unfortunately, he could not garner enough funds to make up his expenses.